Well, what a surprise 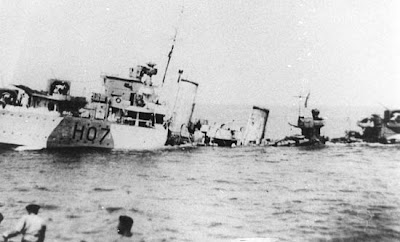 The Daily Telegraph print edition runs a front-page story headed, "Armed Forces will have to seek French help to fight a war". The on-line version does not share the headline, but the key part of the content remains the same.

"At an Anglo-French summit next month," we are told, "Mr Cameron will discuss with President Nicolas Sarkozy a range of options for greater partnership, including the creation of 'high readiness joint formations' composed of British and French personnel." Mr Cameron, we further learn, "told MPs the summit would produce 'some very exciting steps forward'".

There is the real agenda. This a direct continuation of the post-Maastricht defence policy espoused by Major, and supported by Portillo in 1996, and continued by Bair in St. Malo and beyond. The 1996 agreement was even reported by The Independent at the time.

"Anglo-French military co-operation is thriving in a number of areas, despite the anti-European rhetoric of the Secretary of State for Defence, Michael Portillo," the paper said. "An Anglo- French nuclear committee is said to meet regularly and to have made considerable progress since President Chirac came to power last May, although both sides are secretive about the committee's agenda."

You can bet both sides are "secretive", and they still are. But this is not helped by the current newspapers failing to make the links between then and now. Reporters have no memory of previous events and the media has no institutional memory. Every event is reported in isolation, without reference to the previous, linked developments.

Thus, Cameron is able to talk about "a range of options", as if he was in charge, and had thought about the possibilities himself, rather than having had the Foreign Officer deliver them to him as part of an ongoing plan that is decades old. And that is how we are being sold out – small step, by small step, so slowly that the media doesn't notice and can't join up the dots.

The name of the game is "interdependence". Each member state of the EU is being robbed of the capability for independent action, thus being forced to rely on other member states. Through such a mechanism is the process of political integration driven.

The real irony, though, is that if we were to dispense with the annual payments to the EU - £18 billion and rising, we would not have needed to curtail spending on the Navy in the first place. But, of course, these things must not be mentioned in polite company, where European integration is simply a figment of the imagination of those horrid, uncouth eurosceptics.

So, gradually, we move into the end game. The sell-out will soon be complete, happening under our very noses while the clever-dicks sleep on, leaving Mr Cameron and his euroweenies to succeed where Hitler and the Axis powers never could - the destruction of the Royal Navy as an independent force.