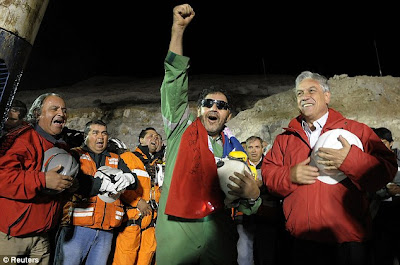 Well, I did the Radio Oxford interview on climate change this morning, alongside Chris Goodall, who was introduced as an "environmentalist". It was left to me to point out that Goodall is actually a politician. He is a paid-up member of the Green Party and stood for them (unsuccessfully) at the last election.

My line then was that "climate change" was essentially a political issue, being used to run an agenda which had captured and subsumed environmentalism. Of course we should all be concerned for the environment, and take care of it – but there is a lot more to environmentalism than climate change. I even got to use the word "watermelon" and explain what it meant.

At least Goodall had the sense to agree about the involvement of politics - and how political climate change really is. But it is not just climate change. Politics creep in everywhere, not least into the amazing rescue in Chile yesterday – which cost an estimated $22 million.

You would have to have a heart of stone not to applaud the bravery, the skill and dedication of the rescuers, but that does not also stop you from observing that industrial accidents in that country last year took 433 lives, many of them in mining – which contributes 40 percent of the government's income.

Thus, it was no coincidence that the Chilean president, Sebastian Pinera, should be present to greet every rescued miner. It was a political statement as much as a humanitarian gesture. But would a politician stoop so low as to exploit the rescue of these trapped miners? It hardly needs an answer.

So back to politics. The brilliant, all-seeing and wondrous Daily Mail (I got a cheque from them this morning for my Halal piece) is pointing out that Cameron is dithering (remember that word, and how the Tories loved to apply it to Brown?) about whether to cut the cold weather payments from the current level of £25 per week to the original £8.50

On the other hand, we have The Daily Telegraph telling us that fuel poverty has doubled in five years. And then, we have the idiots arguing in front of the Commons energy that "failure to impose CCS levy on energy bills would be 'disastrous'". They want the government to add £4bn to our energy bills for demonstration carbon capture and storage plants.

Noises off, though, come from Peter Voser, chief executive of energy giant Royal Dutch Shell PLC. He is saying that the UK government should divert investment from offshore wind power to natural gas exploration and production.

It will be impossible, he says, to hit 2020 carbon dioxide emission reductions targets without increased use of natural gas in the country. Using natural gas instead of coal is also a cheaper way to cut emissions than offshore wind.

But hey! You don't listen to people who know in this man's Army. When you can capture the world's media by standing at the top of a hole greeting rescued miners, when your policies (or lack of them) probably put them there in the first place, the lesson is absolutely clear. Political theatre, not policy, is what matters. Bury the 433 - there is no theatre in dead workers. But spend $22 million saving 33 men in front of the cameras.

Similarly, there is no theatre in pensioners dying of cold, or in saving them. They are invisible. But next week, Cameron meets Chilean president, Sebastian Pinera – and the cameras will be there. Way to go, Dave! Give your best cheesy smile to the nice people and they'll vote for you every time.