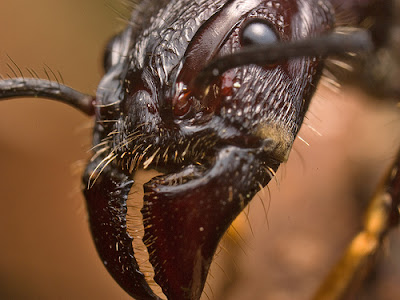 I'm not sure exactly what it is like being eaten alive by bullet ants (one pictured), he writes. But I can't imagine that the experience can be significantly more excruciating than the ordeal I've just endured listening to the hot-needles-in-the-eye bilge and twaddle being spouted by David Cameron at the Tory party conference.


David Cameron is dangerous in the same way that Tony Blair was dangerous – because he sounds so plausible. He has the capacity to tell his audience whatever it is they want to hear – and persuade them that he is speaking the truth, no matter how much evidence he has previously afforded them to the contrary.

I tried to précis one of Blair's speeches once. There are formal rules for doing this, and once I had applied them to take out all the extraneous words, I was left with a blank piece of paper. Cameron is like that – all fluff and no substance. Hague, like his master, is even worse.

The important thing is never to listen to them. The delivery has an obscurant effect. Read their speeches – then the vacuity is readily evident and the lies exposed. The only way they wouldn't be lies is if Cameron – as Dellers observes - had found a way of talking without moving his lips.