Our partners in government 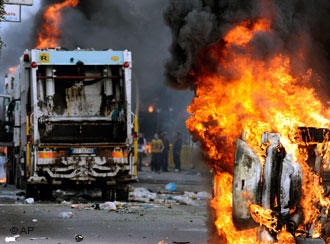 If anything can be taken to define the "European" experience, it is this amazing confrontation over the rubbish of Naples. Over this one issue, we have Italian Prime Minister Silvio Berlusconi vowing to put a stop to an ongoing dispute over whether to build another dump in a national park near Naples, after violent clashes between police and protesters.

As the rubbish piles up in Italy's third-largest city, Naples, and at least 20 police offers were injured in violent clashes with protestors. Thus is Berlusconi forced to say: "We expect that within 10 days, the situation in Terzigno can return to normal." And this at a news conference in Rome after an emergency meeting - about rubbish?  He needs an emergency meeting about rubbish?

What has triggered this is the government's plans to build a new dump in Terzigno, which is located 20 kilometers (12 miles) southeast of Naples in Vesuvius National Park. This has for years met with fierce opposition by locals, who have repeatedly blocked access to the existing waste disposal site there. Then, on Thursday, police confronted around 2,000 demonstrators, who threw stones, marbles and firecrackers and used tree trunks to block access to the dump.

Berlusconi also announced he would release €14 million ($20 million) to modernize the existing facility, which the protesters say is overflowing and causing health problems.

The bigger problem, however, is that the site is overflowing with Camorra, the Naples version of the Mafia, who have taken control of waste management in the region. And while the current report refers to the crisis being a major issue for the Italian government for several years, with Berlusconi declaring a national disaster in 2008 – which is when we picked it up, also charting EU involvement - the problem goes back over 14 years. And still the Italians can't sort it out.

Despite this, as we noted in 2008, Italy is a member of the EU. It is charged with running the government of Europe, through the European Council and other institutions, alongside our own government. Yet you have a government which can't even sort out its own rubbish problems, and it is telling us, the British people, how to run our affairs.

In a way though, the experience is a more than adequate symbol of Europe – an expensive pile of festering rubbish, mired in corruption, surrounded by inept and impotent politicians, which is managing to piss of the local population so much that they are driven to rioting. We should be so proud to belong to such an exclusive club - and hope to share in the end game some time soon.