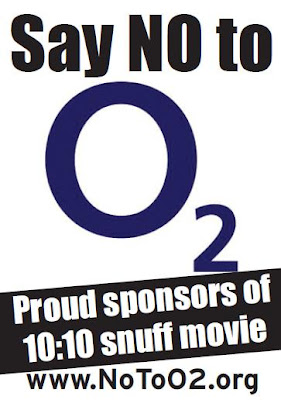 A fully-fledged campaign is now up and running, complete with downloadable poster and facebook page. The first entry on the website is from Nigel Farage MEP, who writes:

"O2 claims to believe in "Social Responsibility", their website proclaims "O2 is striving to be a company that matches its fresh thinking with an equally clean and ethical approach to the way we go about our business". So can it be possible that it associates itself with 10:10 whose No Pressure campaign add jokes about blowing up people who disagree with it?

When it has been questioned about its involvement with this campaign, the official response on its corporate twitter feed was as follows.

O2 supports the aims of 10:10 but we don't ask for editorial control over its campaigns.

That is not good enough. O2 must take this opportunity to disassociate itself from the people who made this video. What would 10:10 have to do for O2 to take an interest in how those they sponsor behave? It might be instructive for you to see how one of 02’s fellow sponsors has acted, in this case Sony,

Sony has supported the 10:10 climate change campaign because we share its objective to reduce carbon emissions. However, we strongly condemn the “No Pressure” video which was conceived, produced and released by 10:10 entirely without the knowledge or involvement of Sony. The company considers the video to be ill-conceived and in extremely bad taste.

We also believe the video risks undermining the work of the many thousands of members of the public, schools and universities, local authorities and many businesses, of which Sony is one, who support the long-term aims of the 10:10 movement and who are actively working towards the reduction of carbon emissions.

As a result we have taken the decision to disassociate ourselves from 10:10 at this time. O2 talks about responsibility. Isn’t it time to act responsibly? Join me in calling for O2 to drop their support for the 10:10 campaigners."