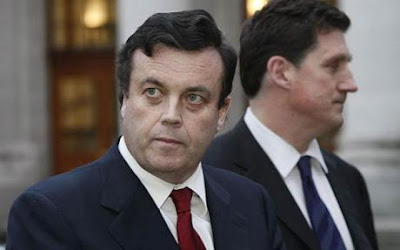 Sometimes the story is in the links, and I set one up deliberately earlier this week in the first paragraph. But you don't get the joke unless you click all the links in turn. Hilariously, though, the joke came alive yesterday on an investor call with Ireland's finance minister Brian Lenihan (pictured above).

Lenihan had been speaking for less than two minutes on Friday before a mistake by the organiser, Citigroup, meant that the bank's clients were all able to be heard on the line. Between 200 and 500 investors are understood to have been on the call, and as they realised their lines were not muted many began to heckle Lenihan.

Some traders began making what one banker on the call described as "chimp sounds and, as the call rapidly descended into farce, Citigroup were forced to pull the plug. What is truly terrifying though is that the "chimp noises" were entirely misplaced. On current form, primates would probably do a better job than the buffoons actually in post.