UPDATE: It looks as if the message is getting through - the video has been pulled from youtube ... but there's always other copies, and Anthony Watts has a neat update.

This cinema advertisement is being portrayed as a humorous "attention-grabber", the warmists' idea of gentle fun to promote the idea of individuals cutting down their "carbon" (meaning carbon dioxide) footprint.

The central idea is that disparate groups (and individuals) are invited to join a "groupthink" campaign. The "refuseniks" are then asked to identify themselves, all under the catch-phrase "no pressure".

Invariably portrayed as sullen and humourless, the "unbelievers" - having been "outed" - are publicly executed in a manner that leaves little to the imagination. The effects are not dissimilar to that of a terrorist bomb, their deaths "activated" by a little grey box with a red button, very much in the manner of triggering a bomb. The whole thing is lovingly documented in this post (now marked "access denied") and this photo sequence (now removed - they have been busy!). 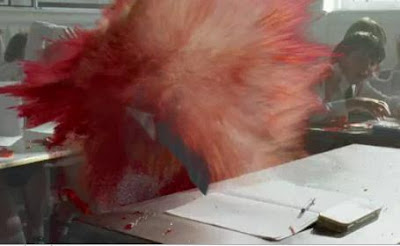 There is a very obvious message to the faithful. The unbelievers must die. 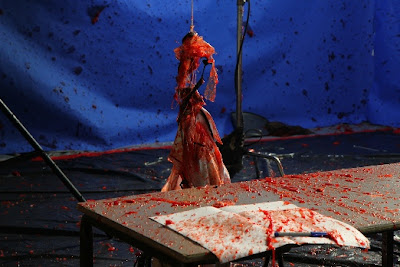 The parallel with Jihadi videos is unmissable the authors display the same fundamentalist mindset which no pretence at humour can disguise. 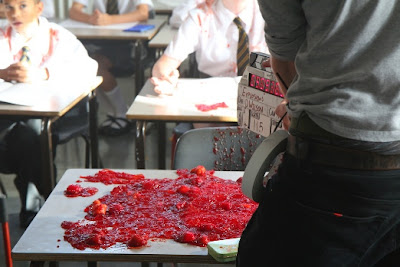 Most chilling of all is the casual attitudes and lack of emotion of the cold-blooded killers, the blood-splattered "teacher" happily smiling while giving homework instructions to her shocked class, after having murdered two of her charges. The SS would have been so proud of her. 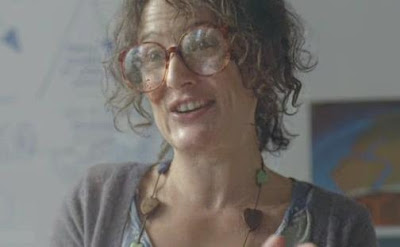 This is not the first time we have got a glimpse into the foetid minds of the warmists – one example Caroline Lucas last year, who famously announced that air travel was worse than stabbing someone in the street – despite her own addiction to this form of travel. 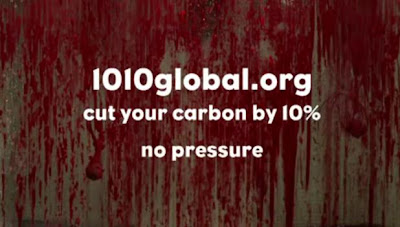 Dellers has a go and as he earlier points out, the eco-fascists are fond of their violent parallels and barely concealed references to 9/11 and concentration camps. But this is the first time they have portrayed (and thereby tacitly advocated) the public execution of unbelievers, in a film that elevates adherence to a belief system above the value of human life.

Had any other religious group done similar, in such a graphic form – Hamas, for instance, suggesting that Jews should be blown apart (as they often do) – even under the guise of humour, then, rightly, there would be outcry.

It appears, though, that for the warmists to promote violent, public murder is acceptable - at least, according to The Guardian. But, if Leni Riefenstahl had made this film about the Jews, would The Guardian have found that funny as well? 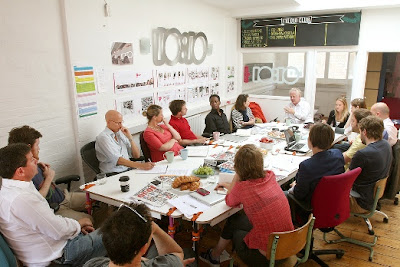 The enemy, in this Eco-jihad video, is revealing its true face. And above is that face - Richard Curtis producer of the film and director Dougal Wilson, with the 10:10 gang. The scene looks normal and the Greenshirts look human, but they are not. This is the face of evil. When do we see the yellow armbands and the gas chambers?

And DEFEAT. The 10:10 organisation has now issued an apology, text reproduced above.  "We're all about trying new and creative ways of getting people to take action on climate change. Unfortunately, in this instance, we missed the mark. Oh well, we live and learn ... Onwards and upwards," they write. Do they think that is enough?

Yet, clearly, the warmists are incredibly sensitive. The Guardian website did not like me posing the question: "if Leni Riefenstahl had made this film about the Jews, would The Guardian have found that funny as well?" The result is pasted above.

Whatever this paper might like to say about its moderation policy, this is evidence of censorship. That is what we have come to, a newspaper which endorses murder - as long as it is presented as "tongue in cheek" - and which actively practices censorship when it is criticised.

To prove the point, a post asking for an explanation of why the earlier comment has been removed disappears completely - there is no trace of a question ever having been asked. And a slight change is made to posting arrangements, as can be seen from the above notification. One is not only censored, but punished for complaining about it. The Nazis and The Guardian now have a great deal in common. On this paper at least, the eco-fascists rule.