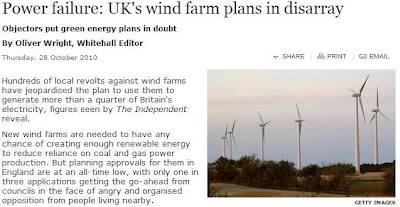 People don't like bird choppers. More than 230 separate local campaign groups against wind farms are operating across the UK, from Scotland and Kent to Norfolk, Yorkshire and Cornwall. These groups are scoring striking successes in defeating planned wind farms – even when faced with the weight of official recommendations.

Anyhow, in the last 12 months to September, there has been a 50 percent drop in planning approvals in England, and approvals for wind farms in Scotland have also fallen. The number of new wind farms coming "on-stream" (becoming active) has also fallen by 30 per cent – partly as a result of the recession.

And shock, horror! The figures are revealed in a report on the state of the industry "cast doubt on the ability of the Government to reach its target of generating 20 percent of all our energy needs from renewable sources by 2020." This is followed by: "Changes to planning laws due to be announced later this year are expected to make it harder still to get planning permission."

You can detect the growing hysteria in the tone when Wright says, "Campaigners say that although wind farms maybe needed to combat global warming, the turbines – often as tall as the London Eye - are an eyesore in some of the most beautiful parts of the country". These (terrible) Campaigners say that they are " unacceptably noisy and can decimate local bird population. They suggest that all new wind farms should be built off-shore."

And against that, we get "environmentalists and industry experts". They say this is unrealistic. The time needed to build off-shore wind farms can be up to seven years, they are more expensive and the technology is still a relatively immature. If Britain is to meet its renewable targets, they say, it is vital that onshore wind farms continue to be built at a significant rate well into the 2020s.

So the Wright stuff laments: "The situation is typified by instances such as those in North Yorkshire, where local politicians recently vetoed plans to build seven turbines in the face of official advice that they should go-ahead after a concerted local campaign." Gosh! How bad can this get? Local politicians reject "official advice"! The world is coming to an end.

Poor Mr Wright. One can feel his pain.