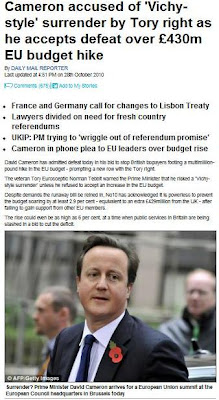 The Daily Mail is on the case, and this will damage the posturing fool. David Cameron, the paper says, "has admitted defeat today in his bid to stop British taxpayers footing a multimillion-pound hike in the EU budget - prompting a new row with the Tory right."

"Despite demands the runaway bill be reined in," it then says, "No10 has acknowledged it is powerless to prevent the budget soaring by at least 2.9 percent - equivalent to an extra £429million from the UK - after failing to gain support from other EU members." Then we learn that the rise could even be as high as 6 percent, at a time when public services in Britain are being slashed in a bid to cut the deficit.

So much for Cameron's big, brave words yesterday during PMQs: "The greatest priority for Britain should be to fight very hard to get the EU budget under control. It is completely unacceptable at a time when we are making tough budget decisions here we are seeing spending rise consistently in the European Union," he proclaims.

It used to be said of people such as The Boy that they were "all mouth and trousers". That fits quite neatly, except one has also to take in the lack of tactical acuity. The last thing a politician should be doing is committing himself to something on which he cannot deliver.

But then, I've long held the view that Cameron isn't even a good politician. If he was, he would have found a way of keeping people like me on board and would have won the last election. But he can't even do that – even his own side is having problems. The man's a loser.