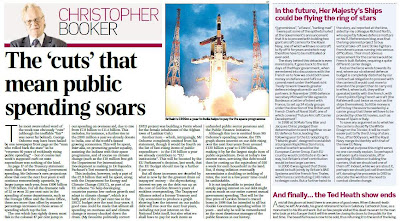 When we were working on a headline for Booker's column, I ventured that there might be an "n" missing from it somewhere. Sadly though, this is a family column so the headline went unamended.

Only in polite society, therefore, was the most overworked word of the week the enless "cuts" - although the ineffable "fair" was never far behind, says Booker. George Osborne may have been hailed by one newspaper front page as the "man who rolled back the state" as he "reverses 60 years of recklessly rising public spending" – but of course last week’s supposed curb on state expenditure was nothing of the kind.

Picking up on page 17 of the Treasury statement, we see that, far from cutting Government spending, Osborne's own projections show that over the next four years it will continue remorselessly upwards, by larger jumps each year, from £696 billion to £739 billion.

Thus, for all the dramatic talk of 25 or even 35 percent cuts in the spending of some departments, such as the Foreign Office and the Home Office, these are more than offset by massive percentage increases in those areas of spending which top the list.
This much you've all read before on the blog, but it can't be repeated often enough.

And the increase which has rightly drawn most flak is the colossal 47 percent jump in our spending on overseas aid, due to rise from £7.8 billion to £11.5 billion. This includes, for instance, a further rise in the £800 million a year we already donate to India, one of the world's fastest growing economies.

This will be spent, inter alia, on promoting gender equality, assisting the Indians with their space programme, and of course on climate change (such as the £10 million free gift the Department For International Development is making to Pachauri's TERI).

This includes, however, only a part of the £2.9 billion that will be spent, along with the Department for Energy and Climate Change (DECC), as part of an EU scheme "to help developing countries pursue low-carbon growth and adapt to climate change". DEFRA and DIFID are also throwing dosh at this fund.

What I didn't realise is that the Jungle Bunny Carbon Fund is an EU-mandated scam so this £2.9 billion is another consequence of our membership of this delightful club. So, while grannies will be blocking up the hospital system, the Bunnies will be getting rich the proceeds of our taxes.

The money itself is a hefty part of the 27 percent rise in the DECC budget over the next four years. A good case could be made that almost all spending on overseas aid and climate change is money chucked down the drain.

Booker's favourite politically correct DFID project was building a Ferris wheel for the female inhabitants of the Afghan town of Lashkar Gah. I asked Dannatt about it, and he hadn't heard of it! That's one of the advantages of being there, I suppose.

Anyhow, another item – which, intriguingly, Osborne completely omitted from his statement, though it would be fourth on the list of fast-rising items of public expenditure – is the £16 billion a year we already contribute to "EU institutions". This will be boosted by the EU Parliament's decision, last week, that the EU Budget should rise by a further 6 percent.

But all these increases are dwarfed by what is now by far the greatest drain on taxpayers’ money – the skyrocketing interest we pay on the debt run up as the cost of Gordon Brown's years of reckless overspending. This runs to about £190 billion in four year's time, making it by far the largest single item of public expenditure.

Even at today's low interest rates, servicing this debt would then be costing us the equivalent of £60 a week for each household in the land. But, if rising inflation eventually necessitates a doubling or trebling of rates, the cost in a few years’ time could be unthinkable.

It is not implausible, says Booker, to project that simply paying interest on our debt might cost as much as our entire current annual government spending. That will be the true price of Gordon Brown's crazed boast in 1998 that he intended to all but double Government spending within 10 years – and why he will be remembered as the most disastrous manager of the public finances in our history.

But behind him is the Cameron-Osborne duo who, given the chance to reduce public spending, have completely fluffed the exercise. Instead, they have managed the perfect storm, putting up taxes, putting up expenditure, cutting services and essentials like defence, and increasing wastage on unnecessary projects.

You have to be real political geniuses to do that ... yet this pair have managed it.