An evening with defence 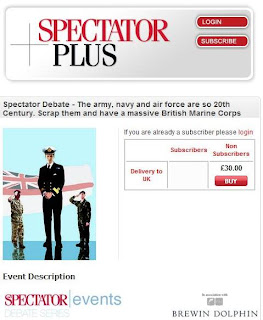 So it came to pass that the North went south to attend the great debate. There was a smaller than usual attendance for a Spectator debate, which is interesting in itself, given the high profile of the defence at the moment.

The motion, I think, was part of the problem ... that the armed forces should be scrapped and replaced with the Royal Marines. It was roundly defeated, and deservedly so, and I say that even though I was speaking for the motion.

I tried to turn the debate by arguing that the motion was a proxy for arguing for institutional change, and that the real need was to break away from thinking about our three services and introduce an Armed Forces ethos, task orientated rather that focused on what the services wanted.

The trouble is with these things though, is that the spectator does see more of the game. You sit there, blinded by the lights, in your little bubble of nerves, trying to marshal your thoughts and hoping you do not fluff your lines.

One point, I made was that the officer corps in the WWII Wehrmacht and Luftwaffe trained together and that the officers only specialised after being commissioned. But it was also the case that Albert Kesselring, in command of Luftflotte 2 during the Battle of Britain, then went on to command OB South and mastermind the fighting withdrawal of the German land forces in Italy.

I am not sure the idea went down all that well, but I also went on to point out that the strategic bombing campaign conducted by the allies during the war was fought by RAF bomber command on the one hand and the US Army Air Force on the other. And, of the two, arguably the US Army was more innovative and effective.

There are loads of other examples which, I think, demonstrate that it really does not matter which service you are in, as long as the function is well defined, and the people in it are properly trained and equipped. The job isn't done better because it is done by any specific service. In the Korean War, the British air component was provided exclusively by the Fleet Air Arm, and so on.

Anyhow, it was entertaining enough, and the dinner afterwards more so. But it was Chatham House rules, so I cannot repeat what any one person said. Nevertheless, the discussion confirms my many impressions of certain high personages. Surprising accord on Afghanistan. There has been something of a learning curve and the original paradigms have been thrown out of the window. We are simply looking for a credible – or any – exit plan.

One really interesting point though was that there was lots of bitching about the cost of the carriers and complaints about them being bought. I made my speech about the European Carrier Group, St Malo and the ERRF ... it was like I'd made a bad smell in the room. They couldn't change the subject fast enough.

I am never sure, therefore, whether these events are worth the time and nervous energy they take. As as an advert for the book and improving its profile, it certainly isn't that rewarding. The Amazon ranking is the lowest its been for some time. However, it does help to climb out of the ivory tower occasionally, and see how the other half live. It is not a pretty sight really, but the beef was actually rather good.