Having contacted the O2 press office, I am informed that the previous message does not represent the official position of O2. This remains as stated, the formal position being:


Along with 100,000 members of the public, leading businesses, schools and universities, local authorities and NHS Trusts, O2 supports the aims of the 10:10 campaign.

We acknowledge our responsibility to the environment and are committed to reducing our carbon emissions both as an organisation and in society as a whole.

10:10 is an independent organisation and we don't ask for editorial control over the content of its campaigns. 10:10's latest statement on this issue can be viewed on its website at www.1010global.org/uk

This is not exactly what we were looking for. However, it is interesting to see that 10:10 now has but one "media partner" - yesterday there were two, one of which was the National Magazine Company (cached) - which only joined up on 2 July. But look how history is being rewritten (current site - same web page). Even the press release has been "disappeared". 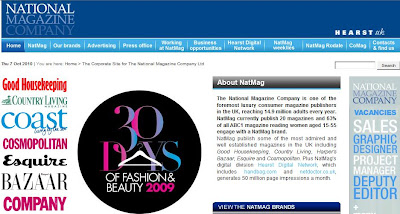 This is indeed progress. NatMag, as it calls itself, publishes 20 magazines in the UK, and was prepared to "use some of its heavyweight titles" to help raise awareness of the campaign and the global day of action, on 10 October 2010 (10.10.10).

There was to be editorial coverage and ad campaigns in the October issues of Cosmopolitan, Company, Country Living, Esquire, Good Housekeeping and Harper's Bazaar, which may now be in jeopardy.