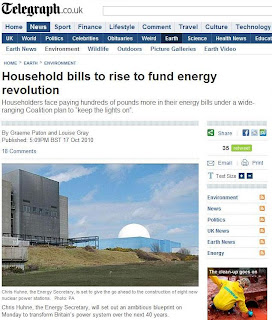 I do wish The Daily Telegraph would get its act together, and somehow try and understand the subject it is writing on.

Trailing that idiot Huhne's "ambitious blueprint on Monday" to destroy transform Britain's power system over the next 40 years, the paper tells us that, "It is believed energy bills are likely to increase by at least £300 a year per household to fund financial support for the wind industry and other renewable projects."

Yet Booker does the maths in his column. Based on official projections, the outcome is that costs are likely to increase by £880 a year, with an extra £22 billion added to the cost of electricity generation.

Then there is Gilligan's recent piece which basically says that wind generation as an option is basically stuffed – which means that Huhne's ambitions of meeting the EU's renewables quota are basically moonshine.

One really does wonder how much further we have to go before the media wakes up to the reality – that our ministers are locked into an expensive and useless fantasy, which even in the process of not working is set to cost up billions.

However, it looks as if there is some small cheer, in that the plans for a 10 mile barrage across the Severn Estuary are being dumped. But this is not a sudden outbreak of common sense – simply that the project is so expensive that it cannot go ahead without public money and there is no money left in the kitty.

We are also told to expect good news on nuclear power, but why am I totally unconvinced an expected "go ahead to a new generation of eight nuclear power stations" is actually going to amount to anything.

The small print will tell us whether it can happen, but there is a strong suspicion that the continued uncertainties in the government position – not least its attitude to nuclear waste – will deter investment.

In other words, even after Huhne has finished tomorrow on energy policy, we will still be at sixes and sevens. But with a moron in charge of policy, reporting to a moron in charge of the government, there was never really any likelihood that it was going to be any different.