For the avoidance of doubt 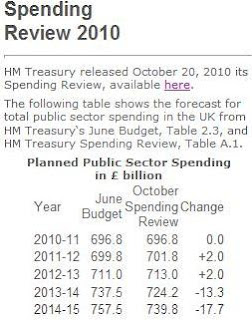 There are no cuts. I say again, there are no cuts. What the Cleggerons are talking about is a reduction in the rate of increase in public expenditure as compared with the June budget. This is helpfully summarised here (see left) and the source is here.

You will see that the current financial year expenditure is £696.8 billion. By 2014-15, the projected expenditure was to rise to £757.5 billion. Little George is now proposing that this increase is limited £739.8 billion. This now becomes a 17.7 percent "cut", albeit that expenditure is still increasing.

Thus, the language of public expenditure has been redefined. A reduction in the rate of increase is deemed to be a "cut". In fact, by 2014-15, annual expenditure will have increased by £43 billion, up 6.2 percent (not nine, as originally stated). By such sophistry, "cuts" are not actual reductions. They are lower than projected rates of increase.

To prove this, straight from the horse's mouth, page 17 of the full Treasury report (para 1.15) states:

But now the spin machine goes into action. To disguise the fact that, in most of the public sector (such as defence) spending is to increase (mainly to service debt and unfunded pensions), officials – elected and appointed – are now going through the elaborate charade of cutting back highly visible public services, including schools, libraries and police patrols.

With the connivance of the media and the unions, the public is thus gulled into believing that expenditure is being cut. By this means, they hope to divert complaints about the progressive deterioration in public services, as the unproductive "tail" gradually eats up a greater and greater share of the funds.

Nevertheless, as we are overwhelmed by the media gush of ill-informed laments about "cuts", we need to hold onto reality and keep stating: "total public spending (Total Managed Expenditure) in 2014-15 will be higher in real terms than in 2008-09". There are no "cuts". They are an illusion.