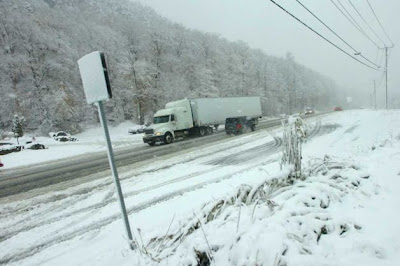 Even if early-season snow is not that uncommon in the area, it's still snowing in parts of the Adirondacks, USA, which are seeing the season's first significant snowfall. Two inches of snow fell Friday at Lake Placid and higher elevations experienced heavier accumulations. Snow also fell across higher elevations in Vermont. Killington had four inches of snow by midday Friday.

And the pic that tells the story comes from this report, showing a truck passing over Sherburne Pass on Route 4 in Killington, Vt., as an unexpected snowstorm dumped a blanket of snow on higher elevations in Vermont.

When it comes to our turn, and the brass monkeys are shedding spherical objects, German entrepreneur Siegfried Rotthaeuser and his brother-in-law have the answer. From China, they are importing "small heating devices", which they have branded "heatballs."

Rated either at 75 or 100 Watts, these personal heaters also give off considerable amounts of light, which gives them a useful secondary role. For convenience, these translucent glass devices can be fitted into standard lamp holders, which previously took 75 or 100 Watt light bulbs of the type now prohibited by EU law.

On their website the two engineers describe the heatballs as "action art" and as "resistance against legislation which is implemented without recourse to democratic and parliamentary processes." We are not sure quite what they mean by that second statement, but we look forward to the first batch of heatballs arriving in this country, hopefully before the expected snows arrive.