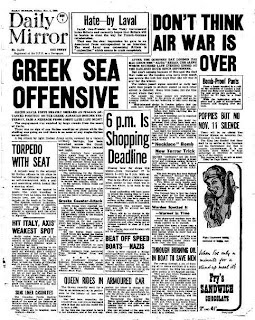 One hundred and fourteen days of continuous blogging on a single subject, the Battle of Britain. And now that is over. The Battle officially ended on 31 October 1940 and today is the 70th anniversary of that ending. With it should come to an end an interesting experiment in what is called "post blogging".

With some prescience, however, the headline of the Daily Mirror for 1 November 1940 warns after a relatively quiet night, "Don't think air war is over".

Of course, it was far from over. Coventry was still to come, in December London was to take its worst bombing to date – with worse to come - and the tragedy of Liverpool was yet to be played out. Bristol, Hull, Glasgow and many more towns and cities were to experience their own nights of terror.

And for me it is far from over. The experiment has spawned a book – still in the writing - to be published in September by Continuum. It will be called "The Many", reflecting the fact that the Battle of Britain currently celebrated is an artificial construct. The true Battle for Britain lasted much longer and was fought by the many, not the few.

The task is now to add to the existing 114 blog pages, layering in more detail, honing and refining the narrative until it is clean enough to be able to "lift" and shape into a book structure. But it leaves me with a conundrum. Should I continue the narrative on the blog, or leave it here? I would welcome observations.

BATTLE OF BRITAIN THREAD
Posted by Richard at 08:42