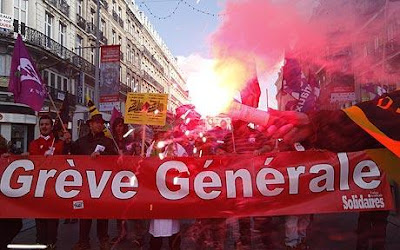 It should not pass notice on this blog, which is supposed to be interested in such things, that the Kermits have been revolting – more than they usually are. Embroiled in a general strike, it appears that as many as a million of them hit the streets last week.

However, while it is being said in some quarters that this invokes the spirit of 68, that seems hardly the case when the core of the strike is public sector workers and their big beef is pension rights. Somehow, that does not have quite the same caché as manning the barricades (or storming them) in defence of liberté, égalité and fraternité.

Furthermore, this level of upset is nothing really new. If you want a really entertaining read, there is little better than Alexander Werth's account of the great Paris riot of 6 February 1934, published in 1935 in his book France in Ferment (you can still get it on Amazon!). Forget the "spirit of 68" - go for the spirit of '34.

(What I found so entertaining, amongst other things, was how the police and rioters shared the same public transport - buses, etc. - to get to and from the riots, and were perfectly cordial during the journeys. Also, being Kermits, they all stopped for lunch - both sides - and then picked up where they had left off.)

The target then, of course, was not Sarkozy but Daladier, who was being accused of giving "free rein to socialist anarchy" and, at the same time, supporting "Masonic crooks". But then, any more than now, who ever said rioters had to be consistent?

Those riots back in 1934 actually presaged a moral breakdown in the French ruling class. Six years later when the "Hun" came knocking at the door, the whole edifice collapsed with barely a fight. And that much 1934 and now have in common – a nation that has lost its way ... in a continent that has lost its way.

Then, however, there was the brooding Nazi presence in Germany. Now, the threats are more diffuse, but nonetheless real. And what of 1934? Six years later, the world had changed forever. Here in 2010, can we be certain that in 2016 we will not be saying the same thing?