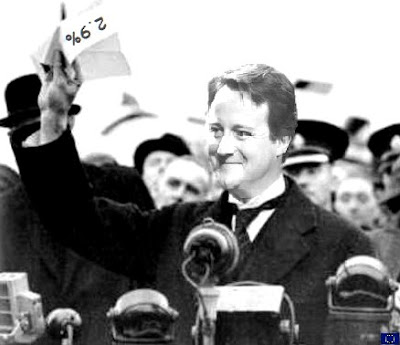 But he hasn't - and there is every possibility that the budget will end up rising by the six percent or so endorsed by the EU parliament. To claim "victory" at this stage is like a football manager calling for his team at half time when he is a goal down, lacks a striker, has no goalkeeper and the referee is working for the opposition.

Far from being a "spectacular success", therefore, this is an example of spectacular stupidity. Or, as MEP and Social Democrat leader Martin Schulz tells The Daily Telegraph, "The negotiations have barely begun - it is not for Mr Cameron to announce their conclusion." His promise is "nonsense" and he is "setting himself up for a fall".

Now, Schulz may be a vile individual – in fact, there is no question. He is a vile individual. But, on EU parliamentary procedure, he knows what he is talking about. Cameron doesn't, as the picture shows (below right) – where he is caught describing his level of knowledge and understanding of EU institutions and their procedures.

And, if you are thinking it can't be that bad, you would be right. It's actually worse. Cameron has walked into a minefield, eyes wide shut, committing an act of quite extraordinary hubris. It amounts to almost suicidal stupidity. It really is spectacular.

His problem is, of course, that he has no power to deliver the goods. He is not even party to the negotiations. The European Council, which he has just attended, has no jurisdiction nor locus in the annual budget negotiations.

All he has managed to do is get the signatures from twelve other member states on an informal letter which simply re-affirms the Council (of Ministers) "common position" which was agreed last August, dropping the payments figure from €130.1bn to €126.5bn. But that is simply a negotiating position, agreed by not 13 but 27 member states. That "position" went before the conciliation committee on 27 October, and the parties have 21 days from that date to agree on a "joint text".

The Committee, not Cameron, has the baton. If it can agree, the final budget could be approved as early as mid-November - but not before. And it would be a very rash man who predicted the outcome.

The procedure, however, is arcane. In the final analysis, the initiative lies with the EU parliament. Here, its position is straightforward – and powerful. Its response to the EU Commission proposal for a 5.9 percent hike – and the 5.9 percent was a Commission, not a parliament proposal – was to increase the figure from €130.1bn to €130.6bn, bringing it to about six percent. That is its negotiating position. The difference is between the Council's €126.5bn and the parliament's £130.6bn.* 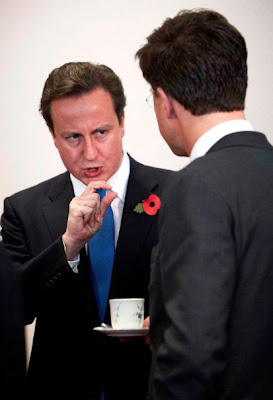 Not only is the parliament not going to accept the Council's 2.9 percent, if by some strange – and extremely unlikely – chance the Council actually stuck to its position, the parliament has a veto. It can pull the budget and force the whole procedure to start over, causing a humungous crisis in the EU, which can be laid at the door of the member states.

That ain't going to happen. The Council negotiating team is going to compromise on a figure somewhere between 2.9 and 6.0 percent, most likely at the higher end.

Cameron claims the letter he has got is a "guarantee" the rise will not be any bigger than 2.9 percent. "What we've done is guarantee, with the support of other member states, that this is 2.9 percent," he says. "They've given their word - 2.9 percent and no further. That's the word they've all given. That's the word I've given."

It is not a guarantee. The letter has no status whatsoever. His "word" is an empty promise. If Cameron thinks he has actually got a guarantee (or given one) - he is delusional. Moreover, his advisors should be fired. If he is listening to them, they are turning him into a laughing stock.

Even then, Cameron's other great "victory" is founded on sand. This, we learn of via The Guardian which headlines: "David Cameron secures link between EU spending and national budgets". From now on, the strap says, "the people who set the EU budget will have to take into account cuts that are being made at national level."

This is simply not true. What we get out the European Council Conclusions is by no means as firm as Cameron claims. Read it for yourself. It says:


Heads of State or Government stressed that, at the same time as fiscal discipline is reinforced in the European Union, it is essential that the European Union budget and the forthcoming Multi-annual Financial Framework reflect the consolidation efforts being made by Member States to bring deficit and debt onto a more sustainable path. Respecting the role of the different institutions and the need to meet Europe's objectives, the European Council will discuss at its next meeting how to ensure that spending at the European level can make an appropriate contribution to this work.

The "money quote" is that the European Council has agreed to discuss to how the EU can make "an appropriate contribution" to helping national governments reduce their debt. That is all – very far short of making a firm link, or any link at all between the EU and national budgets. At best, it is simply a commitment to discuss the issue in very general terms. Cameron is vastly over-selling what he has achieved.

Altogether then, we have a truly weird situation. Prime ministers very often grandstand at European Councils, but their posturing usually has a basis in reality. Cameron's positions have none. Effectively, he has climbed out on the most exposed limb he can find and now seems to be offering invitations to anyone who wants to saw it off.

I do not ever recall a British politician who has displayed such a poor grasp of the issues and put himself in such a [politically] dangerous and exposed position. With neither exaggeration nor hyperbole, one can truly say that the man is plumbing new depths.


* As the Wall Street Journal blog points out, the EU budget is also reckoned on an accrual basis. This allocates commitments to spending to specific years, regardless of when the funds are disbursed. By the payment method, the EU budget in 2010 is €122.9 billion; by the commitments method it's €141.5 billion. The council wants a 0.2% increase in commitments and parliament 1.1%.