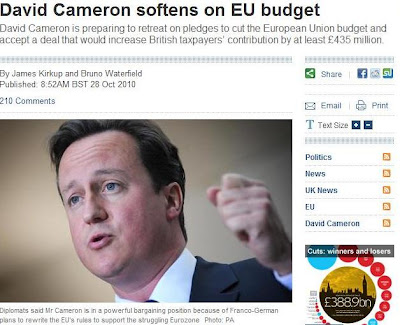 Possibly, he said cautiously – because it is a close-run thing – the level of blind ignorance exhibited by that moronic excuse for a prime minister is exceeded only by the destitution of the cerebrally challenged Telegraph leader writer. This is the paper that has the headline "David Cameron softens on EU budget", which is hard enough to believe, as the man is so soft in the head that any softer and he would melt away.

But for incomparable imbecility, we have as a prize specimen, the breathless statement in the leader:


At this week's EU summit, our most instinctively Eurosceptic Prime Minister for 20 years faces a tricky set of challenges. The easiest to bat away will be the European Parliament's risible demand for a 5.9 per cent budget increase for the Commission next year.

Second, Cameron ain't a eurosceptic, instinctive or otherwise. He is a "One Nation" Tory, in the manner of Heath, which makes him dyed-in-the-wool euroslime. Third, the budget is not a European Parliament "demand", risible or otherwise. It is an EU Commission proposal, made in accordance with the Treaty procedures.

Fourth, Cameron cannot bat it away. It is now a matter for the conciliation committee, as I explained earlier, over which he has neither jurisdiction nor control, the decision in any event being QMV, with the final arbiter the EU parliament.

Thus, no wonder Cameron is "softening". He has no option, because he has no power. And the turds-for-brains in the Telegraph can’t even be bothered to learn the procedures before they write their unmitigated garbage. They and even darlink Hannan can't even apply their limited intellects to understanding the difference between a "summit" and a European Council. 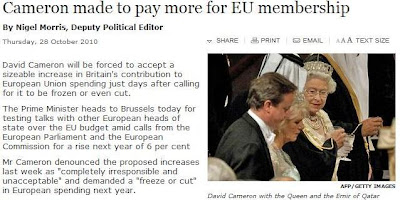 Even The Independent has more brains – a measure of how low the Cameron/Telegraph axis has descended.

But when neither of them seem to have the first idea of how our government is run, there is every reason to be very angry indeed. It is fools like this who got us into this mess in the first place, and now we are having to pay for their stupidity and their venality. They treat us like fools, but they are the fools, and worse.

We really need to treat these malign pustules accordingly. I am sick to the back teeth of them, their posturing, their pretences, their vanity and the ease with which they feel they can take the piss and get away with it.  At a time when they have the unmitigated gall to call for austerity, these ocean-going d***heads are lumbering us with even more expense.

Then you have dear little Norm wittering on about avoiding "Vichy-style" surrenders. He means well does our Norm, but he really doesn't get it. Oddly enough, Petain's final surrender to Hitler came almost exactly 70 years ago, but he surrendered because he had to. Cameron will surrender because he wants to. The approval of the "colleagues" means much more to him than the approval of the British people.


Cameron and his vichy Conservatives like to wrap themselves in the flag and waffle at length about patriotism. The problem is the flag is blue with gold stars that their loyalty is to Brussels rather than the people they are supposed to serve. As a result we are bound into a bloc devoid of democratic legitimacy or oversight and powerless to for as long as we remain part of it. We should feel nothing less than furious contempt for these sickening creatures who have dragged us into this situation and are working hard behind the scenes to keep us there.

"Furious contempt" is a phrase I like. It doesn't get close to the black hatred I have for these slime. But it'll do for the moment.