Surely they can't all be wrong 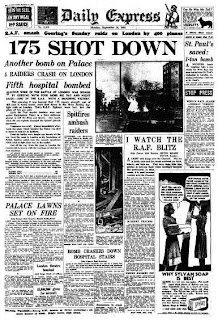 ... about the cuts? If all the newspapers agree, there must be some truth in it?

The answer, of course, is yes - they can all be wrong, and often have been. And just because all the newspapers agree on something that is wrong does not make it right.

A classic example is this headline on The Daily Express from 16 September 1940, which records the air fighting from the previous day – a day which was to be celebrated as "Battle of Britain Day”.

The RAF is finally to claim 185 enemy aircraft shot down, so this early edition of the paper misses that and comes out with a "mere" 175. All the papers follow suit, faithfully recording the official claim – in its manifest variations.

After the war, when there is a chance to check the records from both sides, the actual "kill" is downgraded to 55, as against 27 aircraft lost by the RAF. This is a real enough victory, but so ludicrously high are the claims that they simply invite distrust (which was very much the case at the time).

The newspapers had some excuse for getting it wrong then – it was wartime. But it does underline the fact that newspapers do not actually report news. Largely, they report what they are told by some official source, or some other source they consider to be reliable or convenient, and represent it as fact.

The fact that they all do it, and all get it wrong, simply suggests that "consensus" as a measure is one of your least reliable criteria.  That was true then, and it is just as true now.