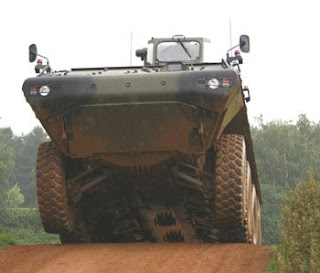 I first wrote about it on 28 July 2004, marking it down as "another blunder of Eurofighter proportions".

This is the £16 billion FRES programme, which I have consistently opposed, writing over 100 pieces about it. Yet I was almost a lone voice, stacked up against an indifferent and ignorant media, with only Booker for support in the media, and the tenacious Ann Winterton in Parliament.

On the other side of the divide, its greatest supporter has been General Sir Richard Dannatt, with the wholehearted approval of the Defence Committee and the Tory defence team.

But now we learn that FRES is dead in the water. "It's a dead duck. It is the definition of everything that is wrong with the MoD's procurement process," says a senior Ministry of Defence source. Actually, this isn't a procurement issue - it is a definition problem. The Army couldn't get its act together and make a coherent case for its future needs.

Fortunately, the project has not gone so far down the acquisition path that it is incapable of being cancelled. And, although I say it myself – because no one else will – that is in no small measure due to the opposition of this blog. Such was its reach and its sister blog DOTR, that we had the then procurement minister coming onto our forum to plead the case, after I had written this.

This I remarked at the time was when the blogosphere came of age. A blog was setting the agenda and forcing ministers to respond. We in turn responded with this - a case which was never satisfactorily countered.   Few people know the effect that piece had on the defence establishment, and why. I do.

You can read much of the background in Ministry of Defeat, still the only book that gets near telling the story. It has a recent review here.

Yet it is the Gen Dannatt who is lauded as the great expert, doyen of The Daily Telegraph - the man who "knows". This is the man who would have lumbered us with that useless pile of junk called FRES, and its lifetime costs in excess of £60 billion. By contrast, this blog won't even get a look in, shunned by the great and the good for telling the inconvenient truths.

Even then, the media doesn't get it. That idiot political editor Patrick Hennessy, who writes the piece about FRES being ditched, states: "The decision will mean that the Army will be forced to fight in Afghanistan and in future conflicts with its existing fleet of ageing vehicles, some of which first entered service in the 1960s."

In his little Westminster bubble, the world passes him by. Has he not heard of the Mastiff, Ridgeback, Wolfhound, Ocelot? How you can be that ignorant and still be a journalist is one of those modern miracles. No wonder they think Dannatt is an expert.