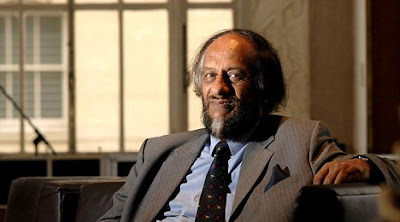 Britain's premier science writer, international mega star and legend in his own lunchtime has saved the world from Pachy - or would have, had he learned how to spell the nickname (which is a bit tricky – you have to leave out the "t" because it is a diminutive of Pachauri).

Anyhow, we know this because he tell us so, and our premier-science-writer-international-mega-star-and-legend-in-his-own-lunchtime can't possibly be wrong. "I am a science journalist," proclaims the man, "one who happens to believe that man-made climate change is virtually beyond doubt."

"Patchy is not a climate scientist," says Pearce. "And he is 70 years old now. There have been too many mistakes during his eight years at the top of the IPCC. And he has made too many of them worse. Patchy is no longer part of the solution to telling the world about climate science. He is part of the problem."

What is especially entertaining is his (Pearce's) reference to the CRU and the e-mail scandal. In a newspaper that insisted on calling it "Warmergate", Pearce says without so much as a blush: "With a certain lack of originality, we hacks called it Climategate."

This is after his romp through "Amazongate" (It – the IPCC - got the references all wrong for a claim that 40 per cent of the Amazon rainforest could die within a few decades from heat and drought. Sloppy again, but no big deal) and "Africagate" – neither of which he names.

Interestingly, he takes Africagate quite seriously, pointing out that the IPCC claims were referenced an 11-page paper by a Moroccan called Ali Agoumi that covered only three of Africa's 53 countries. The paper had not gone through scientific peer review, simply asserted without giving any evidence or sources that "studies on the future of vital agriculture in the region have shown... deficient yields from rain-based agriculture of up to 50 per cent during the 2000-2020 period".

So, the great Pearce raised these issues. But the only answer he got was an e-mail from Pachauri's co-editor Roger Parry (sic) (actually, he is Martin Parry) from a "working retreat" on the Caribbean island of Montserrat. He said the criticisms of his report were "clamour without substance". Patchy (sic) agreed.

Thus does Pearce struggle to a conclusion, suggesting that Rajendra Pachauri must go. "The basic problem here is not climate science," says the great science journalist. "There is very little doubt that the world has been warming this past half century. And little doubt either that man-made pollution is mainly to blame. The problem is the IPCC."

"Nobel Prize or no Nobel Prize, the 22-year old organisation is too important to be allowed to fail. It is badly in need of reform. A fresh start with a new, less accident-prone chairman." So sayeth the great man. Then science can once again triumph – as written up by Fred Pearce. The world is truly saved. The sunlit uplands beckon.