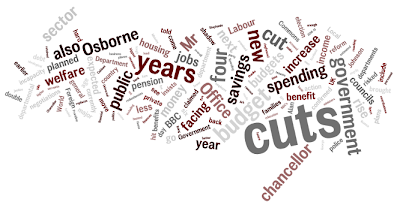 Greg Dyke, the former director general of the BBC, believes the public service broadcaster has damaged its standing at home and abroad with a series of self-inflicted wounds. Thus, we are told, Dyke "accepted some of the blame in an interview with the Observer".

He says - or so we are told - that "the BBC's fraught relations with government and the huge sums it has paid to top management and stars such as Jonathan Ross and Graham Norton had dented confidence in a media network that should be the envy of the world."

"The great strength of the BBC was how highly it was valued by the public; and government should recognise what a huge asset it is. But the problem with salaries started around 2005 and 2006 and was allowed to go on too long," he says.

The trouble is, this does not even begin to touch the depths of the malaise. There is so much wrong with the BBC – as just a glance at Biased BBC, which uses the above word cloud to illustrate the latest BBC view, would indicate - that you do not know where to start.

What particularly struck a chord recently was this fine piece of writing:


I'm getting bored with keeping track of BBC greenie/environment/climate alarmism nonsense - there are so many stories, so much rubbish, so many inane, insane claims, that each report I file here is looking and sounding like more of the same. Black, Harrabin (though he has been keeping a low profile of late) Kinver & co seem to be under instructions to provide a torrent of one-sided propaganda, so much so that I have no doubt that this is being coordinated. They are like the Terminator androids, capable of self-repairing and continuing with their pre-programmed, lunatic mission no matter what happens.

And then writes Robin Horbury:


Nothing will stop it. It's daily, it's there, it's relentless, it's a campaign to indoctrinate us. I have come to see the BBC as a gigantic Trabant, trundling on but oblivious to the parody it has become. Yet the stuff it spews out is dangerous. Our political class and our schoolkids are totally on board (as the normally mild-mannered Harmless Sky blog testifies today). It's a religion of divisiveness, of fascism and of hate (towards the human race); every bit as loathsome and cynical as Nazism.

One wonders, therefore, why Dyke a thinks that the BBC "should be the envy of the world." But then, that is also part of its world view. Despite that, though, the BBC has never had the reputation for itself that it has claimed (or believes it should have). It has always been low-grade, self-opinionated, ignorant and biased, with only the very occasional programme shining out like a beacon from the mountain of dross.

But then, if you are a propaganda outfit, your first priority is self-propaganda – seeking to convince the world that you are as good as your own estimation of yourself. To this task, the BBC devotes an extraordinary amount of effort and, by and large, it succeeds. And assailed by the sheer repetition, there is no end of muppets out there which still believes the BBC is a "good thing".

Dyke, though - as you would expect - is just another propagandist. No wonder his words find a comfortable home in the Observer. In getting to the roots of the inadequacies of the BBC, he is not even close.