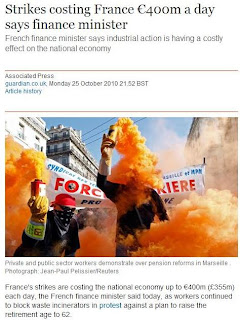 To admit to anything other than savage delight at the incontinence of the Kermits would make me a liar – not that one has anything against the breed. But as long as we are locked into the EU, with their government able to influence and direct ours, we wish them nothing but harm. If the situation was different and we were independent nations, my attitude would be very different.

But what is fascinating about the turmoil – apart from the huge costs of the strikes, at €400m (£355m) each day – is the use of the rubbish weapon. Workers – or non-workers, to be more accurate - are blocking waste incinerators as a tactic to maximise pressure on the government.

Thus, almost 9,000 tons of rotting piles of rubbish are becoming a health hazard in Marseilles, which has been hit hard on land and at sea. Striking dockers at France's largest port are also intermittently blocking ships trying to unload fuel and, although that part of the protest appears to be weakening, the rubbish strike is holding.

Non-workers at a Paris waste incineration plant, in their fifth day of a strike, were catching up with colleagues who have let rubbish pile up in Marseilles, France's second-largest city, giving the capital a more than usually intense bouquet. It now smells like its government.

Multisource political news, world news, and entertainment news analysis by Newsy.com
That, it seems, is what is behind the rubbish crisis in Naples - as the video explains. Local politicians and other rent-seekers, have been using the issue as a weapon with which to attack Berlusconi and embarrass him – caring little for the local environment or the needs of the much put-upon people.

None of these problems could arise, however, if systems were kept on a small scale and maintained locally. It is the gigantism, encouraged by the EU and its legislation, which is the root of the problem. But an even bigger problem is that people for too long have relied on others to take charge of their affairs. It is time they – all of us – took back control.

Come the revolution, though, one of the key targets becomes pretty obvious. Prevent the refuse collection fleet from operating and civilisation as we know it very quickly grinds to a halt.