Kill off the wrinklies 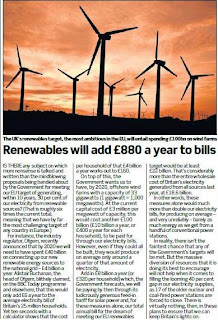 Booker has been doing some homework, on which basis he asks:


Is there any subject on which more nonsense is talked and written than the mind-blowing proposals being bandied about by the Government for meeting our EU target of generating, within 10 years, 30 per cent of our electricity from renewable sources? (That is roughly six times the current total, meaning that we have by far the most challenging target of any country in Europe.)

He then comes up with the total annual bill for the dream (nightmare is probably more accurate) of meeting our EU renewables target, which comes to at least £22 billion. That's considerably more than the entire wholesale cost of Britain's electricity generated from all sources last year, at £18.6 billion. He says.

In other words, these measures alone would much more than double our electricity bills, for producing on average – and very unreliably – barely as much energy as we get from a handful of conventional power stations.

In reality, Booker adds, there isn't the faintest chance that any of the Government's targets will be met. But the massive diversion of resources that it is doing its best to encourage will not help when it comes to filling the looming 40 percent gap in our electricity supplies, as 17 of the older nuclear and coal-fired power stations are forced to close. There is virtually nothing, then, in these plans to ensure that we can keep Britain's lights on.

To all that, comment levels are high, well over 100 at just gone midnight Saturday. One of the comments reads:


Being close to pension age with next to nothing in income, I'll just go without the heat and light. I'm sure the same will apply to many thousands even more vulnerable than me. It was Labour's policies that has brought on this energy crisis. But it seems a good way to cull the ill and aged - so should go quite some way to giving the new Tory government some of the savings it needs!

And that is the size of it. Kill off all the wrinklies and you slash spending. That has to be the reason for this policy. Come to think of it, the SS got it all wrong. If only they had called themselves "greenshirts" and designated gas chamber operatives as "green jobs", they might still be in business.