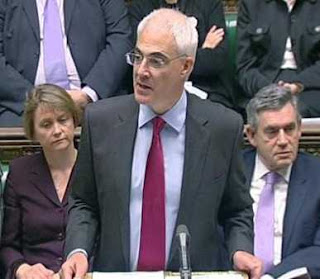 "Gordon Brown borrowed us into this mess, and now he would like to borrow us out of it. We now know what he means by PSBR. It is the Price of Subsidising Brown's Re-election."

That is from Bruce Anderson in The Independent responding to Darling's pre-budget report. And they don't get much more left wing than The Independent. Yet, this paper gives a right-wing commentator house room when he writes, "Brown is not after economic recovery, he's after votes."

The trouble is, Brown may get them. Said Darling in his speech yesterday, "Inflation is forecast to come down sharply, reaching half of one percent by the end of next year." He adds: "Lower commodity prices and lower interest rates, which boost incomes and help business profits, together with the fiscal reaction across the world, will also help."

Add to that the cut in VAT, the increase in pensions, Christmas bonus and pension credit, the increase in child benefits, an increase in the child element of the child tax credit and Darling claims to be helping 15 million people. Taking into account the drop in inflation, those people will be winners and by the time of the 2010 general election they will feel marginally better off.

While others chase the "yoof" vote, as a rule of thumb, pensioners are five times more likely to vote than people of the age 25 and under, giving Brown a tactical advantage, while he passes some of the costs of his bonanza on to people who would not vote for him anyway, or simply will not be voting.

In September last, we suggested that Brown might be a lucky prime minister, just at a time when the bulk of the commentariat was writing him off. By the time his target voters go to the polls, Brown's "luck" may have held out and, despite the prognostications of today, he could pull off an historic fourth term for Labour.

The trouble is that the political commentators are too clever by half. Much of the detail of this pre-budget speech is highly technical and will wash over most people who will neither understand it nor care. And nor have they noticed that Darling, undoubtedly with the approval of Brown, is gradually adding to the burden of "green" taxes.

Most, for instance, will have missed his reference to including aviation in the ETS from 2012 yet that will pull him in possibly £400 million a year and rising, without a single voice in protest from the political classes. Add to that an increasing amount from the energy companies though the existing ETS auctions and, before too long he is looking and extra billion a year flowing into his coffers, going up as the years pass.

Another little twist to the speech is his commitment to extend the renewables obligation for an additional 10 years to 2037. That will guarantee a source of income for wind farms and the like at no cost to the exchequer, but will add significantly to electricity costs as more renewables come on line.

We estimated that this might eventually cost £6 billion a year, but not just yet, allowing Darling to claim, as he is, that he is supporting the green agenda, without people noticing the pain.

Combine that with a Conservative front bench which no longer seems to be able to talk in coherent sentences and relies on an ever-increasing diet of pre-cooked sound-bites and the electoral game seems far from over. The only question is, given all the pain that Darling seems to be storing up for after the election, who would want to be in office after 2010?

But then, we have long since ceased to be able to fathom what politicians think – if indeed they do – and long before that we ceased to care. And that, in the end, may be Brown's most effective ally. The ignorati far outnumber the chatterati.