What a difference a rule makes! 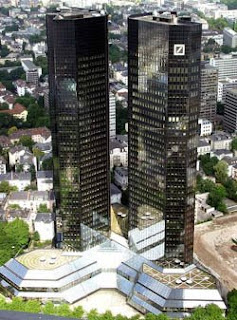 Associated Press, retailed via IHT, informs us that Deutsche Bank AG reported a surprise third-quarter profit on Thursday, "helped by new European Union accounting rules that limited its write-downs of shaky assets hit by the subprime crisis to €1.2 billion."

Investors, we are told, "were cheered by the better-than-expected performance into the headwinds of the global banking and credit crisis," even though net profit was down 74 percent from last year's third quarter. The boost came with the bank earning €414 million in the July-September period, down from €1.6 billion a year earlier but at least the figure was in the black.

The real story behind this was that it had written down €1.2 billion in the quarter on mortgage-backed securities, leveraged loans and commercial real state, among other assets but had been saved from writing down another €845 million by the change in the EU-approved accounting. This had allowed companies "to reclassify assets rather than mark them at what some say are beaten-down market prices."

Said Isabel Schauerte, an analyst with Celent: "A reclassification of assets has prevented otherwise sizable write-downs from eating into Deutsche's bottom line this quarter," adding, "With new accounting rules in place, reported earnings certainly have a more 'subjective' character."

And how did this come about?

Well, in early October we were reporting the dire effect of the "mark to market" rules and noting that they were implemented by EU law. But we also suggested that, to amend them, the EU would have to go through the tortuous process of amending a directive, which could have taken six months or more.

However, we then picked up the Ecofin decision a few days later but where, it transpired, the Gordian knot could be cut was in prevailing on the International Accounting Standards Board to change its own rules.

This was picked up on 15 October by Greg Hands MP,who was warning anyone who would listen against the change. Fortunately, he was completely ignored, not least by the EU commission. With the IASB amendment in its hot little hands, it was able to take a short-cut, amending its own Commission Regulation. Thus, on that very day we saw:

With that, we see the Deutsche Bank AG result, confirming beyond doubt the malign effect of "mark to market" and the effect of what we thought at the time was a "minor and cosmetic" change to the rules. But on that rested an €845 million write-down and made the difference between profit and loss – comfort and crisis.

When the full tale comes to be told of this financial crisis, we may finally see the malign role of the EU-based mark to market rules – the story that, this side of the pond, almost everyone missed.