They never give up 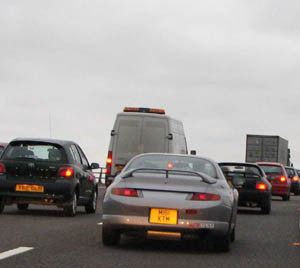 If ever there was a more unpopular policy – and demonstrably so, it is road charging. Over 1.8 million people signed a petition against it last year and there are no indications whatsoever that the mood has changed.

Like the "colleagues" and their accursed constitutional Nice treaty, however, this government won't take no for an answer, having just confirmed that it has commissioned technical trials on satellite-based road charging.

This comes via The Times which is reporting that hundreds of drivers are being recruited to take part in these trials, and also reminding us that this could result in charges of up to £1.30 a mile on the most congested roads.

The test runs, we are told, will start early next year in four locations and will involve fitting a satellite-tracking device to the vehicles of volunteers. An on-board unit will automatically deduct payments from a shadow account set up in the driver's name.

The fact of the trials has been confirmed by Paul Clark, the transport minister, which completely contradicts previous government statements suggesting that it had abandoned the idea of a national road-pricing scheme.

The idea of satellite charging last cropped up under Alistair Darling's watch – when in January 2006, we picked up an obscure report telling us that the Department for Transport had done a deal with "a major German firm", by name of T-systems. It had announced the foundation of a new subsidiary, Satellic Traffic Management GmbH.

This company had been set up specifically to develop satellite-based road toll charging technology and market it internationally and now, from The Times we learn that one of the trials four trials will involve up to 100 BT staff working at Martlesham, Suffolk. And BT is working with T-Systems, "the German company that collects tolls from lorries on 12,000 miles of autobahn."

At this time, trials will of course be based on the US GPS system – the "colleagues" not yet having got their own vanity Galileo project working yet. But, in the fullness of time, you can bet that the switch will be made and Galileo will take its rightful place at the heart of a European road charging system, with the UK a founding member.

Despite earlier, erroneous reports, there is nothing in writing on this – nothing you can pin down. It is all eminently deniable, right up to the point when the system goes into action.

Clark, however, is claiming that the trials are to be used to "help to create a pricing 'tool' that was most likely to be used first by local authorities." But the point about a satellite system, as opposed to localised "tag and beacon" systems, is that the infrastructure costs and management systems required only make sense if used as part of a national system. On the other hand, satellite charging is the only technology than can manage a national system.

Thus, we are seeing a continuation of the slow, insidious and fundamentally dishonest progression by government – in cahoots with the "colleagues" to introduce this system, as we always said it would.

Here, therefore, we have the consistent features of modern government – no matter how unpopular a policy, they will go ahead anyway and, no matter what the opposition, they will still go ahead. They never give up.