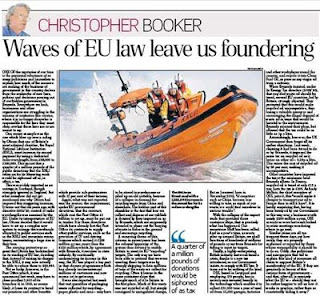 One of the mysteries of our time, Booker writes, is the perennial reluctance of so many politicians and journalists to explain how much of the mess we are making of the business of government in this country derives from the avalanche of new laws, policies and decisions pouring out of our hidden government in Brussels.

Everywhere we look, businesses and other organisations are struggling in the miasma of confusion this creates, where it is no longer clear who is responsible for the laws they must obey, or what those laws are or are meant to say.

The stories speak for themselves, all pointing to one thing – that government is now so diffuse and complex that no one really understands it, or even knows where the centres of power lie.

The problems go far beyond "Europe" of course, which is just one part of the global "tranzie" nexus. The European Union, as much as anything, has become a portal for a proto world government in all but name.

But, because the system has become so utterly obscure and Byzantine in its complexity, it has the hacks and the chatterati diving for cover, seeking refuge in their individual comfort zones as they seek to avoid the reality of the mess modern government has become.

But the top and bottom of this is accountability. Government of a modern nation is a complex affair – we have to work with other nations, agreements have to be made and deals struck. Much of the internal administration of the nation has to be delegated, left to the ranks on anonymous officials who exercise power in a myriad of ways.

What matters is that, when things go wrong, someone must be accountable and be brought to account. The mechanisms must then exist to remedy matters and, as far is possible, to undo any wrongs. This is traditionally the role of Parliament, and the threat of it exercising is power is both the safety valve and the ultimate deterrent.

Thus, right on cue does Booker write. On a day when a great newspaper offers a diet of fantasy politics, he points to the miasma that fogs our society. We are lost in that fog, leaving us leaderless and confused. And that is the way it will stay, unless or until we demand that Parliament re-asserts its authority in our name, the name of the people.