Remember the living as well 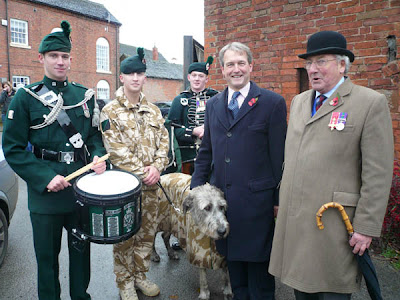 On the eleventh hour of the eleventh day, fine and noble sentiments from my co-editor over at Bruges Group blog, which I completely endorse.

The hour cometh and some were silent for the two minutes. Others, of course, will be silent for eternity, and it was those we remembered, those who gave the ultimate sacrifice and those who did their duty to their country and have passed away with the passage of time. We salute them all.

But fine words and moving ceremonies are more for us than they are for the dead. Unless they are up in heaven looking down upon us, they cannot hear us and in any case our actions are of little consequence to them. Less so the living. Those who serve our country and those who in the near future and beyond are put in harms way.

Like some of their comrades before them, some will not survive the experience. That is the way of war. It is unutterably sad, but that has been the way of things since the dawn of time. But some of those, in the past, should not have died.

Their fall arose, albeit though the direction action of our enemies, but compounded by the stupidity, ignorance, laziness or even the corruption of men and women whose duty it was to care for them and minimise the risks. They should be remembered especially.

The purpose of so doing is to remind ourselves that, even in war, terrible though it is, death is not always inevitable. Even the arena of battle life should be treasured and respected.

And remembering those who have fallen, and who should have walked away alive, we remind ourselves that it is our duty – collectively as is the case in a democracy – to do our best to ensure that those who do serve now and in the future are not put needlessly at risk.

We owe that to those whom we honour now, who mount their fine parades, who willingly pose with our elected representatives (pictured, members of the Royal Irish Rangers, their mascot and Owen Paterson MP), and who then serve, and die.

And for those who say that today is not a day for politics, the answer is yes it is, ever more so. It is politics that sends young men and women to their deaths. It is politics which protects them and brings them back safe. That is the real stuff of politics – not the prattling in the chamber of theatres that has become the House of Commons.

The reality of life and death is not some abstract issue for us to watch on the television from the comfort of our living rooms, but something which – even in our small ways – we have the power to affect.