Tory hands in the till 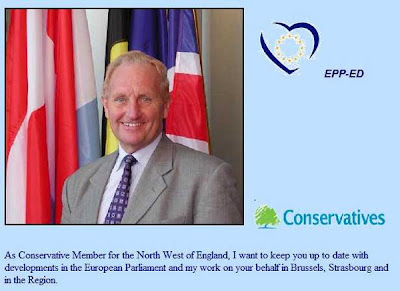 First out with what will undoubtedly be a big story is The Guardian with Nicholas Watt, chief political correspondent, reporting that Tory MEP Den Dover, who resigned as chief whip in June, has been told by the EU parliament that he has "breached its rules" on expenses and demanded that he pay back just over £500,000.

The Sunday Times actually outed Dover in March, reporting that he had paid £8,143 a month in 2002 to MP Holdings Ltd, with is wife Kathleen and daughter Amanda having been appointed directors of the company in 1991 and 1999 respectively.

By June, The Daily Telegraph was on the case, reporting that Dover had been stripped of his post as chief whip, after there had been questions about the practice of using allowances to employ relatives through family companies – "which are legal under Brussels rules", said the paper.

Dover had admitted employing his wife and daughter. He had "vigorously denied any wrongdoing" over payments of £760,000 in staff and office allowances to a family firm since 1999

Oddly enough, I don't think we reported any of this on the blog. The idea of a bent Tory MEP was probably too much of a "dog bites man" story, but half a million nicker is, as they say "sumptn else".

David Cameron, in a swift attempt at damage limitation, has expelled Dover from the Party, leaving the MEP to face a fraud investigation by OLAF – and possibly criminal charges thereafter. This puts the petty larceny of Tom Wise into some sort of perspective. They're both crooks, although Dover seems to have done it with more style - and for longer.

Tory sources are now telling us that the leadership was not acting swiftly simply because there were large sums involved. "There is an important principle here," one source said. "David Cameron has said consistently that he wants total transparency. He will not tolerate this sort of behaviour."

Nevertheless, as The Guardian gleefully points out, Dover's website this evening still listed him as a Conservative MEP. It even had a picture of him next to Cameron (right).

Still, Dover can possibly take some comfort from the damages he will get paid if any of the media step over the mark, having retained libel lawyers Carter-Ruck to extract a "substantial sum in compensation" from The Sun after it had published on 14 February 2005 an article under the heading "Sign in, slope off" accusing him of "immorally claiming tax payers' cash".

One always appreciates MPs with such a refined sense of outrage, us having recorded in March 2005 - in the days when we were on the ball and could actually give a damn – that a little squall had broken out following the approval of the EU parliament's budget committee to spend £6 million on an "information campaign" on the EU constitution.

At the time, this was denounced by Nigel Farage as "a monstrous abuse of taxpayers' money", in which endeavour he was joined by … Den Dover, who had led the fight against allocating the funds. He told the BBC that he thought giving the money was "unacceptable" and possibly "illegal". Dover, it seems, was speaking from first-hand experience.