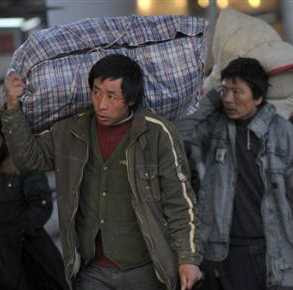 While we as a nation retreat into our own economic misery, confronting a meltdown that can only be made worse by the collective and continued mismanagement of our leaders, spare a thought for China – not least because what is happening there cannot but help impact on us, in diverse but as yet unknown ways.

According to The Times and other sources, between 130-230 million migrant workers are poised to go back to their rural homes. As the manufacturing economy collapses, they are deserting the cities and returning to their roots, in a huge exodus that is set to dwarf even the scale of the "Down to the Countryside Movement" of Mao's Cultural Revolution.

So massive is this movement of people that the Chinese government is setting up an emergency programme in a bid to stem the tide. It has laid down new ordinances requiring large state-owned enterprises to reduce salaries first before dismissing staff while they and even medium-sized local companies need official approval before they can make redundant more than 50 people.

Provincial governments, it seems, are particularly alarmed at the inflow of displaced – and very often penniless workers back into their districts. Many of the rural areas have not shared in the relative prosperity of the manufacturing boom and what economic dynamism has come their way has resulted from the production of higher-value agricultural products to feed the burgeoning middle classes and the higher-paid factory workers.

With less demand for more profitable products and more mouths to feed, rural areas – already under stress – will find it difficult to adjust. Thus, with no realistic chance of employment in their home towns, both central and provincial governments are worried that jobless returnees might add to the social tensions already affecting many of the provinces, while even the limited unemployment insurance funds face bankruptcy.

In a huge country with vast tracts not covered by the western media and a totalitarian government which has almost complete control over local media, it will be difficult to pick up early signs of any nascent unrest that will most certainly result if the flood of workers is not stemmed. 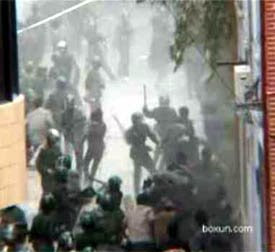 Already though, we have seen significant signs of unrest, and concerns at the effects of slowing growth. The most recent disturbances (that we know about) have been in Longnan city, in Gansu province, northwest China. There, police used tear gas to quell two days of violent protests by thousands of people who used axes, chains and iron bars to attack police, trashing more than a few police cars, leaving them burnt-out wrecks. Unlike many commentators, therefore, we have been suggesting that China is a nation on the brink.

For the West, the immediate outcome is a fall-off in the availability of cheap consumer goods, which had done much to fuel our economic boom – as well as creating unexpected problems (to some) such as the reduction in demand for our waste products.

But, the great uncertainty is how a China under growing economic stress, with massive social problems and the possibility of political unrest, will deploy the money weapon. With $1.8 trillion in foreign reserves, China acting as a loose cannon on the world money markets could cause havoc to a monetary system which is already teetering.

China may be a country a long way away, of which we know remarkably little, but in the fullness of time we may find its problems visited on our shores in a way we least expect and will definitely not welcome.