A small piece of history 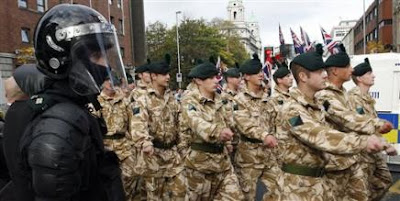 As it wafted past on the TV news yesterday, in between the item on the Congo – and the ever-deteriorating situation there – and God knows what else, it was easy just to observe passively the report of the parade in Belfast of the Royal Irish Regiment (RIR) and supporting elements, commemorating their return home from Afghanistan.

But this was more than just any old parade. It was the first time British troops had marched ceremoniously in Belfast, the capital of the troubled British province of Northern Ireland since 1970. As such, it is a small piece of our history and it thus important that it should be recorded as such, and properly so.

Inevitably, the media concentrated on the violence perpetrated by about 1,000 republicans sympathisers who joined a Sinn Féin demonstration, and a much smaller group of republican dissidents who protested in Divis Street, a main entry point to west Belfast. 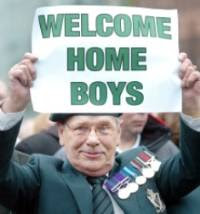 The fact is, though, that over 50,000 ordinary Belfast people – from both sides of the divide – turned out to welcome the troops, defying the threats and blandishments of the hard-liners, defiantly demonstrating that, as British people, they were welcoming their sons and daughters home from war.

Yet, despite the success, it very nearly did not happen. Intense lobbing behind the scenes from Gerry Adams and his republican faction was directed at the Secretary of State for Northern Ireland, Shaun Woodward. It was he who, last month, found time to attend a lavish 3-day party in Morocco, with thirty family and friends to celebrate his 50th birthday, but could not find the time to attend the parade.

Adams and his gang at least managed to prevail on Woodward to cancel a planned Army helicopter flypast but the pressure to hold the parade had become too strong for him to resist.

A good part of that was due to the people of Shropshire who, two weeks ago welcomed the RIR as they paraded through the streets of Shrewsbury – close to their home barracks in Tern Hill, where they are based.

Faced with that example, the people of Belfast would have found it intolerable that the people of the mainland could be so enthusiastic about the return of the regiment while they were prevented from expressing their own feelings.

So it was yesterday that they turned out in their thousands, the largest public demonstration for 15 years, supporting troops whose own reputation for reconciliation in the villages and towns of Afghanistan is unparalleled. As Owen Paterson, shadow secretary of state for Northern Ireland, wrote prior to the event yesterday, by way of a tribute - but as much a challenge:

Drawn together from all over Ireland, these young soldiers are an example to all. They can work well together, freely and harmoniously and deliver the goods. They are not bogged down in recriminations, the petty bickering and in the squabbles of the past. We can all be justly proud of them; I hope that their immensely difficult work will be celebrated by the people of Belfast with the same enthusiasm that they received in Shropshire.

The people of Belfast rose to the challenge, and with enthusiasm. In the face of what is now a mere rump the backwards-looking disaffected, they made a small piece of history. From such small things is larger history made. For that we can be grateful – and proud.