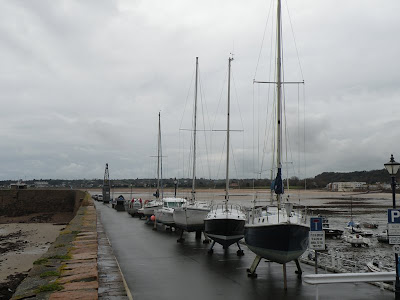 … yesterday morning in Jersey. However, the aircraft was diverted to Doncaster on the way back because Leeds/Bradford airport was fog-bound adding many hours to the homeward journey. It's too late and I'm too tired to do I proper post, so I'll pick up the threads later today.

I note, wearily, however, how comprehensively the media (and the chatterati) are missing the point on Damian Green – especially Matthew Parris.

He writes that, "If … the supposed offence amounted to nothing more than embarrassing ministers with information they had been trying to hide," then there arise some serious questions about the position of the Speaker.

"Mr Martin is an MP," Parris goes on to write. "He, above all others in our unwritten constitution, is there to protect the status and interests of Parliament … This is not a small matter. It goes to the heart of parliamentary privilege."

If, on the other hand, Mr Green has, by virtue of his position as an MP and member of the shadow cabinet, been receiving confidential material from a civil servant acting in breach of his/her obligations on confidentiality (potentially a criminal offence) and has then been feeding that information to the media, not least to gain party political advantage, then this is an abuse of parliamentary privilege.

Once again it has to be said that if Mr Green had raised in parliament the issues - information on which he appears so freely to have leaked to the media - then he would not be currently the subject of a criminal investigation.

Methinks we need a little clarity on this issue, and a little less woolly thinking.