I did warn you! 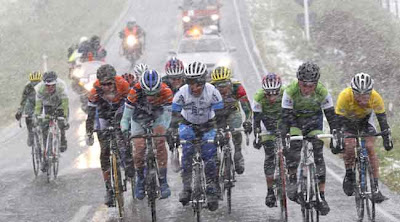 Last month, I gave notice that you were going to get a lot of "weather" from this blog this winter - you got a taste of it last Sunday.

But even our wildest expectations are beginning to be outdone as we see a report from Reno of an early-season storm dropped up to 15 inches of snow in the Sierra, bogging down traffic on mountain highways but hastening the state of the ski season.

The Boreal resort atop Donner Summit reported 12 to 15 inches of snow from the storm, and said it plans Thursday to become the first Tahoe resort to open for the season. Alpine Meadows resort just north of Lake Tahoe on Tuesday reported 10 to 14 inches of new snow, and said it hopes to open slopes on 26 November.

"Winter has made an entrance," said David Thatcher, the resort's snowmaking manager. "This weather system has not only provided the cold temperatures needed to begin making snow, it has given us a head start with natural snowfall as well."

As most Tahoe resorts traditionally open around Thanksgiving – the fourth Thursday of November – winter has indeed made an entrance, rather early.

Further south, in Denver, a storm dropped up to 6 inches of snow in the Colorado high country, and more is on the way. Much of western Colorado was under a winter storm warning on Wednesday. The National Weather Service says the snowfall could reach 16 inches.

This also affected the town of Aspen which had Highway 82 over Independence Pass near Aspen closed during a storm on Tuesday night, while icy conditions on the highway in Snowmass Canyon wreaked havoc with the Wednesday morning commute.

Even voting in the US election was affected with the mayor of Park City Utah worried that the first persistent snowfall of the season could deter voters. Presumably, they needed time to reflect on Obama's global warming strategy. 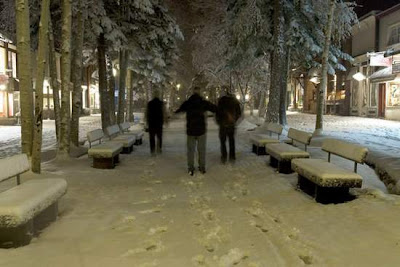 But, if the onset of snow has been well signalled in North America, on the other side of the world, in New Zealand, winter has refused to go out like a lamb.

Ferocious snow storms have hit the Southland cycle race, on the fourth stage from Invercargill to Tuatapere, on the tip of South Island (pictured top). The weather forced the shortening of the stage, with race chief commissaire Russell Miller, of Australia, declaring that "The conditions were atrocious, some of the worst I have ever seen in my 45 years as a rider and as a cycling official."

Rather more than just an inconvenience were the conditions in the western Chinese province of Yunnan, where heavy rains and snow have killed 40, with as many missing.

The snow has been affecting northwest Yunnan. Heavy storms blanketed major roads with 20 inches of snow and cut off traffic in the Diqing region. This follows what is described as "the worst snowstorm in history" which devastated Lhunze county in the northeast Tibet autonomous region between 26-28 October. Residents are now preparing for new snowfall, with forecast scattered snowfall between 2 and 5 inches.

Closer to home, The Times is reporting: "No shortage of snow for early season skiers", noting that webcams of the ski resorts across Europe are showing considerable falls of snow in many of them, including Val d'Isère in the French Alps and the higher Austrian resorts. That rather confounds the Cassandras who were in full flow, last May.

And, bang on our doorstep – in a possible foretaste of things to come – the agricultural research centre at Rothamsted in Harpenden, England, reported that some of its crop experiments had been badly hit by October's snowfall.

The cutting of hay on the long-term classical experiment Park Grass at Rothamsted was interrupted - the first time this is believed to have happened, while the early snow also caused considerable damage to the Rothamsted biomass crops with eight foot tall miscanthus being completely bent over and buried under the snow. Fourteen ground frosts were recorded during the month.

However, all this is of nothing to the climate change industry. Researchers at York University Washington have decided that climate change may be about to affect the lives of rare species such as the giant panda, because of fears that global warming is likely to result in substantial re-distribution of plants and animals.

The researchers focused on the effect of climate change on the bamboo, which is the giant panda's principal food, discovering that while some types of bamboo reduced in range due to global warming, others actually increased. The findings, we are told, will provide important information to help to safeguard the endangered animals' future.

Nils Christian Stenseth, an evolutionary ecologist at the University of Oslo in Norway, is thus complaining that their growth cycle has been interrupted by changes in the snowpack imposed by climate change, with the famed population spikes no longer occurring. At one site in south-central Norway, there has been no significant population growth since 1994.

Never mind. There are plenty of human lemmings ready to take their place.