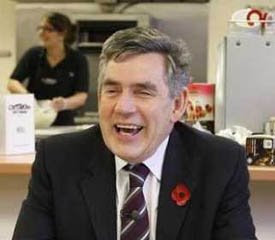 Forget the US election … this 'ere is the reely important stuff – the Glenrothes by-election. That's up in Scotland somewhere and, according to The Daily Telegraph, what should have been a shoe-in for the Scottish National Party has become a humiliating defeat. Labour has held the seat with an estimated (at the time of writing) majority of between 3,000 and 5,000.

Although this is somewhat less than its general election majority of 10,664, it represents a remarkable turn-round in the political fortunes of Gordon Brown, of whom, only a few months ago, the political obituaries were being written.

Considering the acres of garbage being written about him, the prospects of a leadership contest and all that, we can feel pretty smug about our unwavering prediction that Brown would see this term through to the next general election in 2010. And, given the lacklustre performance of the Conservatives, we would not entirely rule out him coming back for more.

The hilarious thing about this election is that, for all the hubris of Alex Salmond, the SNP leader having spent the previous 48 hours confidently predicting victory, on the day the voters did not play ball. This left SNP campaign managers to blame heavy rain in the evening for keeping their supporters indoors. Fair weather friends, indeed, one might say.

Anyhow, a week is a long time in politics – as they keep saying – and this result will be quickly forgotten, but the signals are unmistakable. The Tories have got a fight on their hands and – dare we say it – they are going to have to up their game to be assured of victory.