None of the above 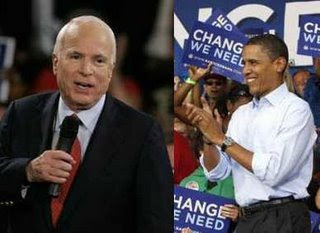 Quite rightly, Anthony Watts over at Watts up with that is raising the alarm at Obama's "energy plan".

Although Watts notes that talking about the election "tends to suck all the oxygen right out of the room," this issue needs to be aired, he says. There's more to Obama than bankrupting coal power plants. He also intends to make energy prices "skyrocket".

The Wall Street Journal, however, argues that Obama and McCain are "broadly like-minded in their approach to energy and the environment."

Though important policy differences exist – the paper says - both support "energy independence" and a large-scale reorganization of the US economy in the name of climate change. The candidates, in other words, come in different shades of green.

This we did point out last August, although one particular difference is the approach to the Supreme Court judgement in the case of Massachusetts v EPA which ruled by a single vote that the EPA (effectively) must treat any greenhouse gases as "pollution", to be regulated under America's Clean Air Act.

This, we picked up here and here but, as Booker noted yesterday Obama intends to support the judgement and let the EPA rip.

Both courses – from either candidate – however, spell economic suicide for the USA, not least because both support "cap and trade", the "green scam" based on the EU's utterly mad emissions trading scheme.

Choice of candidates, therefore, is a choice between whether you want your suicide quick or slow – whether you jump off a bridge and be done with it, or feed yourself small doses of a slow-acting, cumulative poison, suffering a long, lingering death.

Obama or McCain – that is the choice. If it was up to me – which it isn't – it would be none of the above.

I don't really want to know any more. The television and radio stay resolutely off for the next 24 hours. Most particularly, I do not want to hear anything the BBC has to say about the US election. I will pick up the result from the internet when it's all over ... and weep.