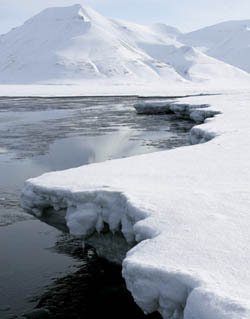 Published by Canada.com is a jolly little tale about how the EU has taken it upon itself to declare the Arctic region part of Europe's "immediate vicinity" and thus invite itself as a party to talks over the future of polar exploitation.

Even though the commission concedes that the European Union has "no direct coastline on the Arctic Ocean", having decided on this fabled, "immediate vicinity" status, it is thus proposing that all nations which do actually have direct coastlines should conform with "binding international standards" to govern offshore oil extraction. And, of course, the EU should have a hand in framing those "standards".

This move, says Canada.com (rather appropriately under the circumstances) is likely to prompt "a cold stare" from Canada and some other polar nations. But, undeterred, the Commission has still gone ahead an issued a report asserting its growing interest in the natural resources and environmental health of "the rapidly melting Arctic Ocean".

This, the commission proudly declares, its "first step towards and EU Arctic Policy", which it believes is "an important contribution to implementing the Integrated Maritime Policy for the EU."

To that effect, it has identified three main "policy objectives", which are: protecting and preserving the Arctic in unison with its population (presumably the polar bears); promoting sustainable use of resources; and contributing to "enhanced Arctic multilateral governance".

To bolster its claims to being a party to this "enhanced Arctic multilateral governance", it has opened a "thematic website", which proudly offers an "action plan" for the "EU and the Arctic region".

There, it tells us that the EU is inextricably linked to the Arctic Region (hereafter referred to as the Arctic) by a unique combination of history, geography, economy and scientific achievements. Three member states - Denmark (Greenland), Finland and Sweden - have territories in the Arctic. Two other Arctic states - Iceland and Norway - are members of the European Economic Area. Furthermore, Canada, Russia and the United States are strategic partners of the EU.

The problem for the ever-ambitious EU is that Finland and Sweden, as well as the EU-associated "economic partner" Iceland do not have Arctic Ocean coastlines. Those three nations were not invited to attend a Greenland summit in May that resulted in the five-nation Ilulissat Declaration - an explicit rejection of any new multilateral frameworks for governing future economic activity in the Arctic.

While noting that Canada and the four other signatories to the Ilulissat Declaration have committed to the "orderly settlement of any overlapping claims" in the Arctic, the commission's report pointedly states that "since then, several of them have announced steps extending or affirming their national jurisdiction and strengthening their Arctic presence."

This, of course, simply will not do for the commission. National jurisdiction, as we all know, is an anathema to the EU, not least because, "Climate change might bring increased productivity in some fish stocks and changes in spatial distributions of others."

Even worse, "New areas may become attractive for fishing with increased access due to reduced sea ice coverage. For some of the Arctic high seas waters there is not yet an international conservation and management regime in place." This, the commission says, with more than a hint of desperation, "might lead to unregulated fisheries." You can sense rather than see the stress on the word "unregulated", the ultimate of all horrors.

One is almost tempted to snigger quietly at the back of the room at the chutzpah of these people, except they are serious. They will keep plugging away in the hope that they wear down the other players and eventually get their way.

However, since much of the new EU policy is predicated on the premise that there is that "rapidly melting Arctic Ocean", perhaps someone might do them a favour and take the commission for a trip into the ice fields and show them what we can all see from the satellite pics – that the Arctic Ocean ain't melting.

Whoever does this kind deed, though, would do us all an even greater favour by leaving them all there.