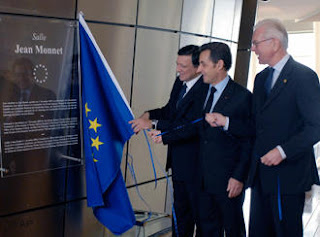 "Obama to 'act swiftly' to resolve economic crisis", blare the headlines, reporting on the intentions of the president elect of another country who is not even in power for another 70-odd days.

On the other hand, who has noticed that, yesterday, our own government met – in Brussels – to decide on its "common position" on reforming the global financial system? All 27 member state leaders were there – which includes our beloved premier – and, according to temporary boss-man Nicolas Sarkozy, "There is a pretty detailed common position from Europe … We will be defending a common position, a vision … for restructuring our financial system."

"Defending" from what? one might ask. The answer is from the United States and other global players, at a meeting of the world's leading economic powers in Washington on 15 November – when president Bush will be in the chair.

What that common position is, I have no idea – but it is the British position. Our prime minister has agreed to it. The funny thing is that you can read all about Barack Obama's plans for the United States in the British media today. If you want to read something of what our government did – but not very much – forget the British press. Nowhere can I find reference to the meeting in today's editions.

You can try Voice of America or, if you want a fuller account, go to Deutsche Welle.

The even funnier thing is that, even though this is happening under our very eyes, no one, apart for the occasional nerd and EU Referendum readers, actually gives a damn. Most actually resent being told. Having lost control over our own government, the bulk of the population is happier watching the theatre of a proxy government rather than getting to grips with the reality of our own powerlessness.

Our experience of democracy has become vicarious - to be enjoyed through others and never, any longer, directly.

And the picture? Representatives of our government take time off from deciding our financial policy to unveil a plaque commemorating the 120th birthday of Jean Monnet – the man who set in train the destruction of our democracy. It is perhaps fitting that the bulk of the people in this country haven't heard of him, and would think you were talking about an artist if you mentioned his name.

So nobody gives a damn about his 120th birthday either. At least we have that in common.