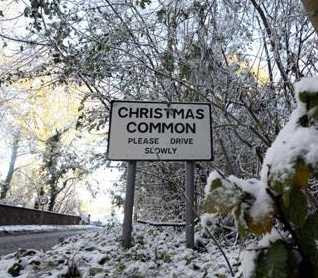 There is an air of unreality about politics at the moment, which makes it difficult to focus, not least because what goes on in Parliament (and the EU for that matter) seems to have no relationship with what is going on in the real world.

The one thing the politicians do not seem to be able to do, however, is look out of the window, physically or metaphorically. They are trapped in their own little bubble, entirely unable to see what is happening outside.

Looking though my own window this morning, past the denuded trees, bereft of leaves, at a cold, grey sky, one could detect a couple of flurries of snow, while the biting wind on the way to the paper shop told its own story.

That much is confirmed by the media, which is running a spread of stories about the expected "Arctic blast", not least The Independent which is telling us that blizzard conditions and freezing temperatures are predicted to envelope much of Scotland and England.

Several weather warnings are in place and motoring organisations have warned that the snowy conditions could create hazardous driving conditions on the roads. Snow, we are told, was already falling at 10am this morning in parts of eastern Scotland and north east England as the weather front moved in from the Arctic.

What, of course, is missing is any triumphal gloating about "global cooling" – a remarkable omission when the "warmist" tendencies in the media normally on to any unusual weather event to illustrate that we are all going to fry.

But what I am particularly enjoying is the report in the online edition of The Daily Telegraph which tells us that the winter has already arrived and temperatures have plunged below freezing.

Wasn't this the same paper that told us a month ago that, because of global warming, green Christmas was more likely than a white one? It quoted Dr Tim Sparks, a climate change specialist at the Centre for Ecology and Hydrology, saying the warmer winter months mean children have little hope of seeing snow on Christmas day. He added: "I would put money on a green Christmas rather than a white Christmas this year."

Interestingly, The Independent is telling us that bookmakers William Hill have reported record betting levels on a white Christmas. They have cuts the odds on snow falling on Christmas Day in London from 8/1 to 6/1 and Glasgow is now as short as 7/2.

William Hill spokesman Rupert Adams says: "We have never had so much money in the book with over a month to go. If it snows we will be paying out millions to our customers."