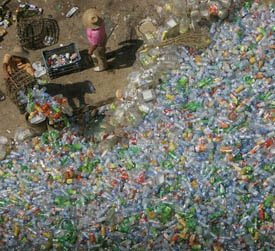 Eat your hearts out greenies! Whatever you do, do not attempt to recycle them.

With the collapse of the China market for our rubbish, The Sunday Telegraph is telling us that Hertfordshire county council has withdrawn a scheme that allowed residents to recycle everyday items like yoghurt pots, margarine tubs and other types of plastic packaging. It has now become uneconomical to do so. The items will now go into landfill sites and the council has asked residents to avoid buying products with too much plastic packaging.

This is thought to be the first case of a local authority scrapping a recycling scheme but "industry experts" now fear more could follow suit. Worried that this will put additional strain on the remaining landfill system, the Local Government Association (LGA) is writing to all councils urging them to resist the temptation to divert recyclable rubbish into landfill.

Dozens of councils and their contractors, says The Telegraph are understood to have already started storing waste, although few have publicly admitted it, fearing it could undermine public support for recycling schemes. In Oxfordshire, we are told, plastic bottles and card are piling up in depots.

Then we have Community Waste, in Milton Keynes, which works as a contractor for a number of councils. Its director, Richard Cutts said: "The situation is extremely serious. Few realise just how serious." He adds: "We are continuing to recycle rather than store 2,000 tonnes of waste a week – and that is costing us £70 a tonne. Obviously, we cannot continue to do that forever." Looks as if the man will have to make some Cutts.

But "chickens coming home to roost", hardly begins to describe it. Soon enough we will be getting pictures of thousands of tons of waste material stacked up on disused military airfields, and another greenie myth will have bitten the dust. If they are lucky, the stinking mounds will be covered by snow, while we send them all the greenies off to the Arctic to rescue whales trapped by the ice that was not supposed to be there.