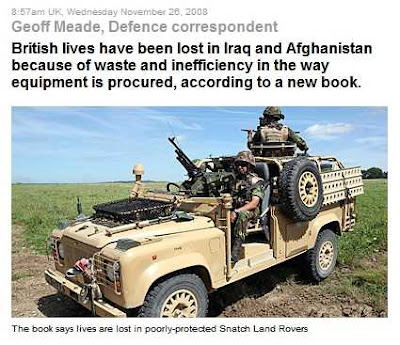 The television station is reviewing a book called, "Changing The Dinosaur's Spots - The Battle To Reform UK Defence Acquisition." Written by Bill Kincaid, a retired brigadier who until recently was in charge of operational requirements for the MoD, it claims that the rising UK military death toll in Helmand is partly caused by waste and delay in providing better equipment.

Lives are lost in poorly-protected vehicles like the Snatch Land Rover - over which an SAS commander recently resigned - because money to replace them is squandered elsewhere, says Kincaid, who warns it may take a major defeat on the battlefield before the problem is put right.

Kincaid, of course, is blowing smoke. We have already suffered a "major defeat on the battlefield" – it's called Iraq. Look to the story of al Amarah, about which we hope to publish today. Any which way you cut it, this was a major defeat for the British Army - through no fault of the men on the gound, who performed heroically. The response was simply to "spin" the defeat as a victory – with the media rolling over and buying the line.

But, if you expect any sensible or informed comment from the media, look at the pic posted by Sky and then the caption. That is as good as it gets. The problem is that this sort of superficial, lacklustre coverage typifies the media in general, right across the board. Nothing you read can be relied upon and nothing they say can be trusted. This is the world of "newspeak".