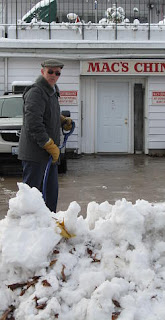 After last week's effort, I had not intended to return to the subject of the weather so soon. But after the intervention of the railway engineer, we now have a further episode of madness that simply cannot be ignored.

Our friend James Hansen, uniquely it seems, is reporting via his magical mystery GISS temperature dataset that October 2008 was the warmest October on record. This is conveyed via Watts up with that. What pulled the temperature up, according to Hansen was that, although North America was cooler than normal, Asia apparently suffered from a massive "heatwave".

On the other hand, the satellite data from NOAA recorded that the US had its 44th coolest October (out of 114 years), much of Europe was cool, ice extent grew at a record pace and snowcover exploded in Asia.

It didn't take Watts's readers very long to discover why Hansen was so adrift. An examination of the individual records shows that the September figures for Russia have been carried forwards into October unchanged. Thus, Hansen has magicked a heatwave out of a simple data error.

In the real world, away from Hansen's foetid dreams, the weather continues to deteriorate. Most interesting is our tiny corner of the world where, in Scotland, agencies report that "early snow and ice has triggered the start of an £8.5 million plan to keep Scotland's main roads open this winter." The early start to winter has already seen contractors and operating companies treating parts of Scotland's 2,000-mile motorway and trunk road network (below, right). 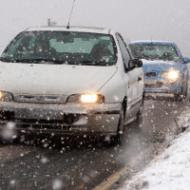 Strange, though it is part of the UK, nothing of that has been mentioned by the English press. But then it ain't London snow. That, apparently, might come by Thursday and then the world will come to an end.

Meanwhile, across the pond, it seems to be Canada and the US Lakes area that is taking a beating, with reports here, here, here and here variously bringing tales of heavy snow and unseasonable weather.

Interestingly, the first report talks of a high number of deaths from road crashes – an inevitable effect of bad weather. But we never hear of global warming the advantage that it reduces road deaths attributable to bad weather.

This story here, from Ontario, is also interesting, not least because it offers a gallery of 24 snow pics. We have used the first (top of this post), for the very simple reason – it depicts a Mr Cameron. David? I wish. It might bring him closer to the reality he so very obviously has left behind.

Worrying though is the news from South Dakota. This brings reports of downed transmission lines and snapped power poles, with a "lot of deep snow" and "...snow cats and snow machines out there trying to figure out what's going on." Some 45 inches of snow fell in the northern Black Hills and 10-18 inches on the prairie in western South Dakota. Where there was not snow there was freezing rain and high winds, with local floods.

But that was not the worrying bit. That came from the Agriculture Department. It reported that rain and snow had "halted row crop harvest progress", adding in its weekly crop report that some farmers do not expect to get back into the field until next spring.

That is the reality. We were talking about the effects of prolonged cold weather earlier this year. Last winter was highly marginal for winter wheat and if the conditions we are seeing begin to be commonplace, we are looking at five percent or more shaved off global crop yields, particularly wheat. The effect of that do not bear thinking about.

The problem is that pace Hansen, the "colleagues" are still in the land of the fairies, intent on looking the wrong direction. They won't change, or course – not until Hell freezes over. But then, we might not have very long to wait for that.