What about the searchlight? 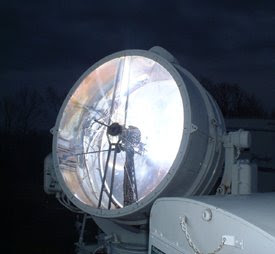 "We already operate in a system where Parliament is effectively neutered, little more than a rubber stamp for legislation that ministers have already decided," writes Lib-Dem leader Nick Clegg in The Daily Telegraph today as he airs his "outrage" over the Damian Green affair.

"Ministers?" one might ask, in the context of upwards of eighty percent of our legislation coming via the European Union, of which Mr Clegg is an enthusiastic supporter. Yet it is our continued membership of that very organisation which, more than anything, has neutered parliament and made it little more than a sideshow.

As one would expect, however, the elephant in the room is not mentioned by Mr Clegg. There is not so much a hint of the existence of the EU – which he entirely supports – and its dire effect on the nature of our parliamentary democracy. The deception is thus complete with all the woes put down to "Labour" which is incorporated into the heading of his piece, telling us: "Damian Green arrest shows how Labour is destroying our political system."

Accordingly, we have Mr Clegg complaining about a Government which was elected with the support of just 22 percent of British voters (as opposed to an EU commission which was "elected" by zero percent), with him writing, "it presides over a culture of Whitehall secrecy and minimal parliamentary scrutiny." Then he complains, "Opposition MPs must table urgent questions to force ministers to address the House on major issues, while ministers merrily leak those same statements to newspaper journalists."

This is so strange as to be utterly bizarre. One problem is that, by and large, opposition MPs don't table questions, urgent or otherwise, on issues that matter. They have chosen instead to play political games - of which PMQs are a classic example - lodging questions that will give them "soundbites" which they can offer to the media as tasty morsels.

For the truth of that statement, look to one small example which we offered in an earlier piece. There, you see a complete absence of interest displayed by the official opposition in what turned out to be a key issue. Time and again, in the blog proper and on the forum, we have highlighted the failures of opposition to use the tools available to them and now we see a member of the opposition actually complaining about the lack of effect of the tools he has ceased to use.

Thus does Clegg assert that, "One of the weapons MPs do still have in their armoury is to play the Government at its own game. By releasing information of our own we can highlight matters of public interest that ministers would rather people didn't know about."

Yes indeed, Mr Clegg, you can "release information" – but through the very mechanisms you decry, do not use and have helped destroy. And so does he further complain, "With parliamentary scrutiny so feeble, the media has become a surrogate debating chamber. And when dealing with an administration legendary for its secrecy, you increasingly have to rely on whistle-blowers to see the full picture."

It is in that specific context, where Mr Clegg and his colleagues have allowed parliamentary scrutiny to become "so feeble" that we must then read Clegg's further offering. "Damian Green's arrest," he writes, "now threatens that ability, especially if MPs can no longer act as he did, without fear of the police knocking on their doors to rifle through their possessions and search their offices. Then yet more scrutiny will be lost."

Put in a nutshell, having ignored the parliamentary process and allowed it to atrophy, Clegg wants to protects the "surrogate debating chamber" that has sprung up to replace it. "We are made no safer by this arrest and the country will not be run any better," he whines. "The door to proper public scrutiny of what the Government does in our name will have been closed a bit further, and the small shaft of light that still shines on the work of ministers will have narrowed even more."

That "small shaft of light" adequately describes what we have left. Yet, the great searchlight of real parliamentary scrutiny lies unused in the corner because the likes of Mr Clegg know too well that it would show up the very flaws in the system that he himself supports. Instead, he blathers on about what amounts to a pocket torch – getting worked up about something that, in truth, really does not matter.

More importantly, it missed the point - perhaps deliberately. What really does matter is that parliament is not doing its job. On that, Mr Clegg is silent. Yet, so limited is the understanding of the hyperventilating chatterati about parliament, and about how parliamentary scrutiny and accountability should work that they have allowed themselves to fall for this fluff, captured as always by the hystérie du jour, following the agenda set by the MSM.

The only question for this blog, I suppose, is why are we surprised?