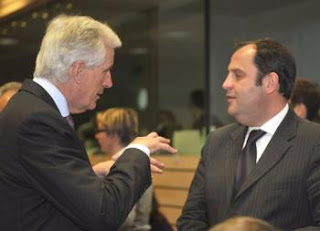 The BBC – the only MSM outlet to report it so far – heralds the news with "EU reaches deal on farm reforms", telling of "marathon all-night talks" between member states before a hotly contested deal was reached by a qualified majority vote.

Of the agencies, AFP also reports it but the rest of the media seem entirely uninterested.

That tells you a great deal about modern governance, but it also tells as much about the EU. Originally, it was extremely nervous about using the r-word, calling it a "health check". Then, agriculture commissioner, Mariann Fischer Boel was telling us that the process underway was a more "nuanced" approach aimed at a way of achieving "a better way of handling available resources."

So little did the general body politic – to say nothing of the media – actually care though that, yesterday the "colleagues" had abandoned the euphemism and come right out with the spin, openly declaring that they were, once again, reforming the Common Agricultural Policy.

But, as we pointed out earlier, this is tinkering at the margins, with some technical alterations and tweaks, continuing the process started almost as soon as the CAP was introduced, some time in the long distant past - 1968 or thereabouts.

So it was that on Brussels yesterday, totally anonymous officials discussed arcane and technical detail, coming blinking into the sunlight, or whatever, waving their bits of paper, claiming another "triumph" – to universal indifference. No doubt our agriculture minister was there – I am not sure I even know who he (or she) is any more, of even if we still have one. It hardly seems to matter any more.

The "colleagues", however, obviously care enough to spin the result, but very few other people do. This once great agricultural nation, which still has a massive and vital agricultural industry, no longer has an agricultural policy. That is "done in Brussels" so we, and especially that sad little institution called parliament, don't need to bother about it anymore.

In the fullness of time – at this rate – everything of any importance will be "done in Brussels", relieving our politicians of the need to do any serious work at all, or take any responsibility for their actions, other than hold great debates on their salaries and expenses, the latest round of failures of Hackney social services - and the next steps in legalisating or banning prostitution. Don't tell the "colleagues" though. The Strasbourg whores might get very angry.

But the truth is, when it comes to what used to be great matters of state, no one really cares. And that is why we're going down the tubes.