The taxman is watching … 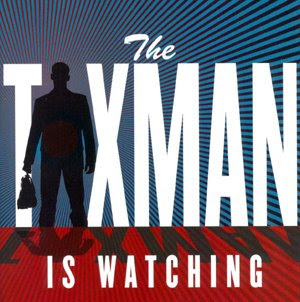 … and laughing all the way to the bank.

But, as always when dealing with "climate change" the media lose what little sense they have (which is not a great deal) as their brains dribble out of their backsides and they comprehensively miss the point.

Thus does The Guardian complain about the government's first auction of the EU's "carbon permits" under its fatuous Emissions Trading Scheme (ETS) in terms of the UK "undermining" the climate fight by keeping the cash. "Receipts of up to £60m should be earmarked for 'green' projects as in other European nations," it tells us some "observers" are saying.

In similar terms, the Times retails a headline proclaiming, "Protests as carbon permits auction raises £54m", telling us that: "The Government has provoked anger by saying proceeds of sale will not necessarily be used to tackle climate change issues."

With all the blather about tax cuts to kick-start the economy and drive the nation out of recession, though, what neither of these idiot newspapers tells us is that this money (which seems to vary between £54-60 million) is a tax – a brand new tax that will be clawed from everybody's electricity bills, just at a time when they can least afford it.

The money comes from the electricity generating companies who have been forced to buy four million permits at a rate of £13.60 per ton of carbon dioxide they expect to produce, money they will have to claw back from us.

The Institute for Public Policy Research (IPPR) said ministers should not keep the money – which is going into the general pot - and use the cash specifically for projects such as improving energy efficiency of homes, investing in low-carbon technologies and helping poorer countries cope with climate change.

"This is a great opportunity to help poorer households make their homes both cheaper to heat and warmer, and create jobs through investment in new green technologies," said Lisa Harker, IPPR co-director. But, either way she cuts it, it is still a tax.

Still, at least we are getting closer to understanding how all this global warming comes about. WWF-UK, it appears, has a man called Keith Allott, who is "head of climate change". One speculates that, if he was fired, perhaps the climate change would stop. On second thoughts, fire him anyway.

As for the The Times it gaily informs us that this is only the start of the bonanza, telling us that from 2013, the EU, which has committed to cutting its carbon emissions by 20 per cent by 2020, is expected to move towards 100 per cent auctioning of the permits.

It takes The Daily Telegraph to use the "t-word", even if it can't spell "emission" (see above) – what is that paper coming to?

At the end of its report, it has Per Lekander, an analyst at UBS, saying: "Someone else is paying and the Government doesn't even have to argue that taxation has increased". Then we get Andreas Arvanitakis, an analyst at Point Carbon, saying, "Auctioning is seen as a way of killing windfall profits, particularly in the electricity sector". 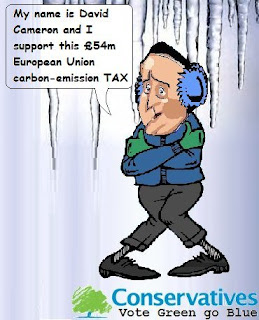 Ah! So, it is a windfall tax, which is exactly what we said it was in August, when there was all that kerfuffle about increased energy costs. But now those costs are poised to go down again, the government – with the aid of the EU – is pushing them back up again, with a regressive tax that hurts the lowest-paid most.

Funnily enough, even The Financial Times noticed how the self-appointed champion of the poorly paid, David Cameron, was silent during the ongoing debate on the windfall tax – although his then energy spokesman, Alan Duncan, did eventually object to it.

But, now the government has levied this tax, which will increase year-on-year, there are absolutely no prizes for correct guesses about what Mr Cameron will now do. It appears that it is not only the media suffering diarrhoeal brain loss when it comes to climate change.