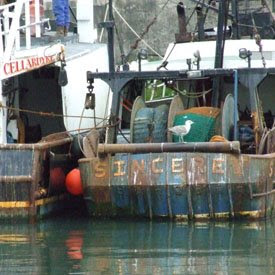 We've written about it before, most recently in June last year and then again in the January of the same year.

This is engrenage - not talked about much in polite company and if you mention it to the average politician of journalist, you will be greeted with a blank stare. Yet, in our June post, we explained that this mechanism, loosely translated as gearing is one of the major drivers of political integration within the European Union.

We even went so far as to explain the mechanism, even in the certain knowledge that many of those who should know will steer clear of this blog, like it was the plague, and this remain in their desired state of blissful ignorance. For the rest, those of us who have ambitions to drive the tumbrels or cheer their passing, we wrote thus:

So it is that we see another example of the mechanism, this one relating to what qualifies – despite intense competition – as one of the most disastrous policy yet to be devised by the EU, the Common Fisheries Policy.

Through this dire, bureaucratic construct, the EU has managed to devastate the fishing grounds of the member states and, in particular, the formerly teeming waters of the Continental shelf around the UK, variously reckoned to have held some 80 percent of the commercial fishing stocks in the waters that come within the boundaries of the EU member states.

But, all-encompassing though it might be – there is one huge gap in the policy. It leaves the enforcement of the EU fisheries laws to the member states. And having turned commercial fishing virtually a criminal activity, having demonised fishermen and driven most of them into penury or alternative livelihood, the EU commission is complaining that those foolhardy or desperate enough to remain in the industry are not being fined enough by their member state courts when they fall foul of EU rules, and that there is too much variation in fines for similar offences in the different member state courts.

Thus, in an absolutely classic example of engrenage the commission is asking member states to approve "dramatically tougher enforcement of fishing rules". There is no word, of course, of the EU itself having created a conservation disaster and an entirely unworkable, which creates the very "criminals" to whom the "tougher enforcement" should apply.

Instead, it invokes visions of "motherhood and apple pie", pleading that this move is necessary to "stop years of illegal catches that have devastated species such as cod and tuna."

With such noble ambitions declared – quietly sliding over the real agenda, the pursuit of political integration – the commission thus proposes that EU officials would receive new powers to pursue fishermen in their home countries for offences such as fishing in protected spawning areas or out of season for threatened species. Inefficient and costly checks at sea would be replaced by reinforced investigations at port.

Needless to say the fishermen must be punished severely under this new regime, with fines rising to as much as €300,000 for serious breaches of (EU) fishing rules - 100 times greater than current fines in some cases. Repeat offenders could lose their permits.

To bolster his case, EU fisheries commissioner Joe Borg declares that low fines and weak enforcement by some member states "makes a mockery" of the EU's "tough catch quotas," calling in aid one of its favoured captive NGOs, the WWF, to support it.

But, while the WWF exudes horror at the supposed depredation of the evil fishermen – thereby seeking to enlist the approval of all "right-minded people", who have been indoctrinated with decades of "anti-fishermen" propaganda – the EU gets a new brick in the growing edifice of its common judicial system, with a uniform application of fines across the EU, monitored and controlled, of course, by the EU commission.

We have already seen a similar attempt with EU environmental laws, this one driven through the ECJ, but this is the first overt attempt to standardise penalties through the direct application of a new EU law.

If successful, this will set a stronger precedent for a system of common penalties throughout the EU. In the fullness of time, possibly after the passage of many years, the commission will then look to encroachment into another policy area. And so, slowly, steadily and inexorably, the process of engrenage does its deadly work, so stealthily and cleverly that hardly anyone notices – much less protests.

Jean Monnet – deviser of the mechanism – certainly knew what he was doing.