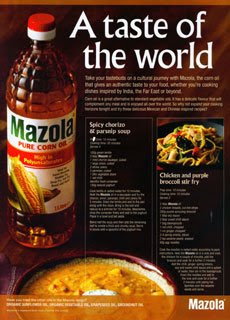 With tales of economic doom and gloom dominating the media, prime minister Gordon Brown's reputation is shot to pieces and the pundits are having a field day.

But, creeping in from stage left is a little bit of good news which, to readers of this blog – who have read this piece and this - will not come as a great surprise.

The news comes courtesy of The Times which is retailing information from Associated British Foods, which is saying that the worst of the food inflation we have been suffering is over.

ABF is one of Britian’s biggest food producers and it should know. It has noted that the price of corn oil has fallen by a third over the past four months and wheat prices hit their lowest for a year last week. The group is thus poised to bring down the price of Mazola oil (pictured), one of its biggest-selling vegetable oils, for the first time for more than three years.

On a broader front, official figures are showing that input price inflation at food manufacturers across Britain had eased in August to 15.9 percent, from 19 per cent in July. Prices in the shops, however, are continuing to rise – a normal phenomenon. They tend to lag behind raw material prices when they are going up and the reverse tends to happen on the way down. But, soon enough, we are likely to see some falls.

Furthermore, manufacturing input prices are also dropping at the fastest rate in 22 years, after the price of oil and scrap metal tumbled, the latter reflecting the downturn in global economic conditions and a slackening in demand for commodities.

All of that suggests that inflationary pressures are easing, which may give the Bank of England an opportunity in the not too distant future to reduce interest rates – easing the credit market and, in particular, making mortgages marginally easier to afford.

Interestingly, The Times has a good record on this issue, forecasting the emergence of food inflation long before other newspapers were interested in the subject.

And with easing of inflationary pressure, some of Mr Brown’s political problems will ease. The news comes far too late to save him, as the political "tipping point" has long been and gone, but at least he will have a few brownie points to trade when he gives his speech to the Labour Party conference.

He may have pulled off his purple banana trick (see also here) which may give some cheer to his beleaguered troops.