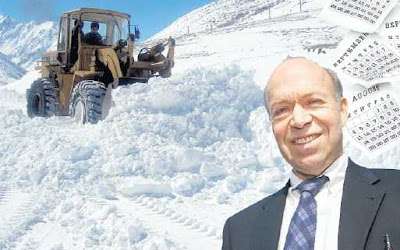 I had lots of plans for yesterday's posts, not least a full review of Booker's column, on the "surreal scientific blunder" made by Nasa's Goddard Institute for Space Studies (GISS) and our friend Hansen (pictured above).

However, I was caught out by the news from Afghanistan of another soldier killed by a bomb. My intentions to do a brief piece changed when I found out what vehicle was being used or, to be more precise – misused. I decided to do a little digging, which became a lot of digging, ending up in my writing a far more detailed story than originally intended, which is posted on Defence of the Realm.

This piece will be entirely ignored by the chatterati who have so many more important things to discuss and the points made will be largely missed by the media, most of which find it impossible to understand the finer points of military issues, and therefor so often completely miss the point of an emerging story.

Nonetheless, as Booker very kindly (it was his idea) points out in his column, it is really quite interesting how many of the things reported on DOTR (and EU Referendum) later appear on the front (and other) pages of the MSM sometimes with acknowledgements but most times not. We can take a quiet pride in that and it would not surprise me if some of the story just written also found its way into the MSM.

The claim (I can't recall when or who) by some clapped-out dead-tree journalist that blogs are "derivative" quietly dies when you look at the material this (and a few other) blogs provide. The trouble is, though, not being "derivative" sometimes takes a lot more work than simple "drive-by blogging", as today has shown.

So, we'll pick up the threads later today and, mixing metaphors outrageously, crank the treadmill into gear.