An Almighty sense of humour 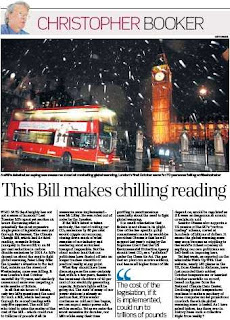 As Booker suggests in his column today, the Almighty must have a sense of humour. Only He could arrange, so fortuitously, for it to snow last Tuesday while MPs spent yet another six hours discussing what is potentially the most expensive single piece of legislation ever put through Parliament … on global warming.

There is no point in going through the debate – the die is cast. Nor is there much point going through the comments on the online edition of the Booker column. There are some good, some bad. All of them are wearily familiar. We have long got past the stage where there is any dialogue (if there ever was). The protagonists have taken their positions and are talking past each other, while the MPs have already made their decision, locked as they are in their tiny self-referential bubble.

But this was also the week, Booker notes, that one of the few specific policy commitments made by would-be president Obama is that he will support last year's ruling by the Supreme Court that the US Environmental Protection Agency should treat CO2 as a "pollutant" under the Clean Air Act.

He writes that the gas that no plant can survive without, and hence all higher forms of life depend on, would be regulated as if it were as dangerous as arsenic or sulphuric acid. Obama also supports a US version of the EU's "carbon trading" scheme, costed at hundreds of billions of dollars. It seems the global warming scare may soon become as crippling to the world's richest economy as anything our own politicians are hell-bent on imposing here.

And this is the man that would be president.

However, this was also the same week - as reported on the admirable Watts Up With That - that nearly 180 places in the US, from Alaska to Alabama, have just recorded their coldest October temperatures or heaviest October snowfalls on record, based on figures from the National Climate Data Center.

It was also the week that we saw Arctic ice continue to rebound and, as significantly, the worst snowstorm in living memory … in Tibet. 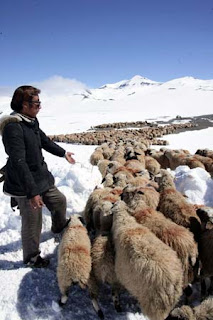 Lhunze, the worst-hit region, we are told, had 36 consecutive hours of snowfall from 26 October, causing an average snow cover of five feet. It was reported to be over ten feet thick in some places. "It was the heaviest snow I've ever seen and the snowstorm was totally unexpected," said the Tibetan woman."

Among the 2,158 known stranded, 1,892 had been rescued and evacuated to safe areas, with soldiers, government staff and other rescuers still struggling to evacuate the remaining trapped people. Local meteorologists said the snowstorm was rare in history for the region.

The bad weather in the region is a re-run of last March, at the tail end of winter. This time we have seen it earlier and harder, boding ill for the rest of the season.

Writes Booker, "Declining global temperatures continue to make a mockery of those computer model projections on which the whole global warming scare is based," – his conclusion: "As I have asked before, has there ever in history been such a collective flight from reality?"

If Tibet is a foretaste of reality, the serried ranks of MPs in their centrally-heated debating chamber - prattling on about global warming while it snowed outside - may prove to be one of those historical moments ranking alongside the supposed cry of Marie Antoinette, calling for the starving peasants to eat cake.

They too will need a sense of humour as the tumbrels come to collect them.